The car that’s been coming to our village the last few weeks showed up again today, for the first time at nightfall. The 3 salamingas that have been building the solar center jumped out of their wheel machine smelling like water instead of their typical smells of dirt and sweat. They also wore nicer clothing and seemed prepared for some sort of celebration. Little did I know I was in for a surprise…

The three met with Fatima, Fatimata, and Hamshowu; the owners of me and my goat family. During the last two weeks I’ve heard them talking about how excited they are about running what they call a “solar business.” I’m not sure what that is, but they mentioned how they will finally be able to see and do work at night. The group gathered in the structure they built next to those shiny panels aimed at the sun. Shortly after, the rest of the villagers made their way from prayers towards this building each with a gadget in their hand.

The sun was completely gone and had been for a while now. I was hungry so I decided to do some grazing. And then it happened… I’ll never forget it. The boy Mohamed lifted his gadget and a beautiful white light lit up his face! It was unlike anything I had ever seen! Then there was another light, and another! One-by-one these gadgets lit up the sky. My owners, the villagers, the 3 salamingas, all of them started dancing and laughing. All of the sudden my owner walked towards me, like he was choosing me for some special purpose. He put a rope around me and started bringing me towards all the fun. I must admit I was pretty scared. It’s a great honor to be selected by your master. 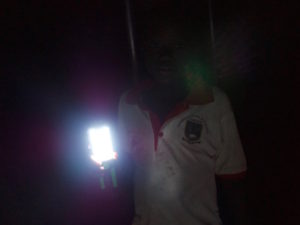 Silence fell as he brought me into the center of the group and handed my rope to TJ. “Yo TJ!” He brought our village clean water the last time he was here. He’s a good guy. I thought we might just be hanging out together, but then TJ and one of the salamingas lifted me into the back of their wheel machine. 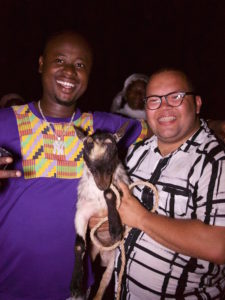 And so here I am, telling you this story because, well… it’s been the wildest day of my life. My new owners have even given me a name, Minga! I’ve never been in a wheel machine before, let alone one with these three who now smell like sweat and dirt instead of like water. The village is all that I know, I’m not sure if I’ll see it again. I want to remember it. So I’m sharing my story with you now. Why wait? Life is short.

Singing off,
Minga the goat
Adventurer and Narrator
Formerly of the village of Moya