If you have been reading our “voices from the field” series, than you have gotten a small glimpse of the everyday work that our 2011 Winter Fellows completed during their time here in Ghana. You’ve seen how they built polytank stands, danced with the children in their villages, distributed safe storage containers, held village meetings, performed water quality testing in the lab, trained local women how to make water from their local sources safe to drink, and even sampled some traditional Ghanaian food!

The day-to-day work is fun, but sometimes slow; exciting, but often exhausting, and sometimes, its easy to get lost in all of the small details of the project. Looking back over the past 5 weeks, the bottom line is this: the 2011 Winter Fellows provided permanent sources of safe drinking water for over 4,200 people! That is pretty amazing!

Of course none of the Fellows’ work could have been possible without your support! We’d like to thank all of the parents, teachers, friends, neighbors, churches, community groups, local businesses and everyone else who supported the 2011 Winter Fellows – without all of you, the fellowship teams could not have made such an amazing impact during their time in Ghana! THANK YOU!

The Session 2 fellows started off their third day in Tamale with a great presentation by Foster Soley from unicef, who spoke about the work his organization is doing both here in Ghana and around the world. Foster is a WASH (Water, Sanitation and Hygiene) officer at unicef, who we have been working with in our unicef-cws partner villages in Central Gonja. His presentation was interesting and relevant, and the fellows asked some great questions!

After lunch, the teams headed out on their first trip to the field to visits some CWS sites! Team 5 went to went to Zanzugu and Gilanzegu; Team 6 checked out Chani and Nymaliga, while Team 7 when to Yipela and Nyanguripe. The fellows had a great time seeing our water treatment centers in person for the first time, and (as the pictures below show) seemed to assimilate with the villagers quite well!

The next day, the teams hit the the road bright and early so they could be at the villages in time to see people buying water. After an hour or so at the water treatment centers, they then performed random household visits where they could see how the water we provide is actually stored and used in the home. They took water samples at each house, which they brought back and tested in the lab to make sure the water wasn’t being re-contaminated.

After a long day in the field, the fellows and I were definitely ready for a good meal. Annie’s family friend invited all 17 of us (12 Session 2 fellows, 4 Session 1 fellows and me!) over to their house for dinner and dancing. The meal was delicious (and of course the dancing was a blast!) It was an amazing experience that none of us will forget! 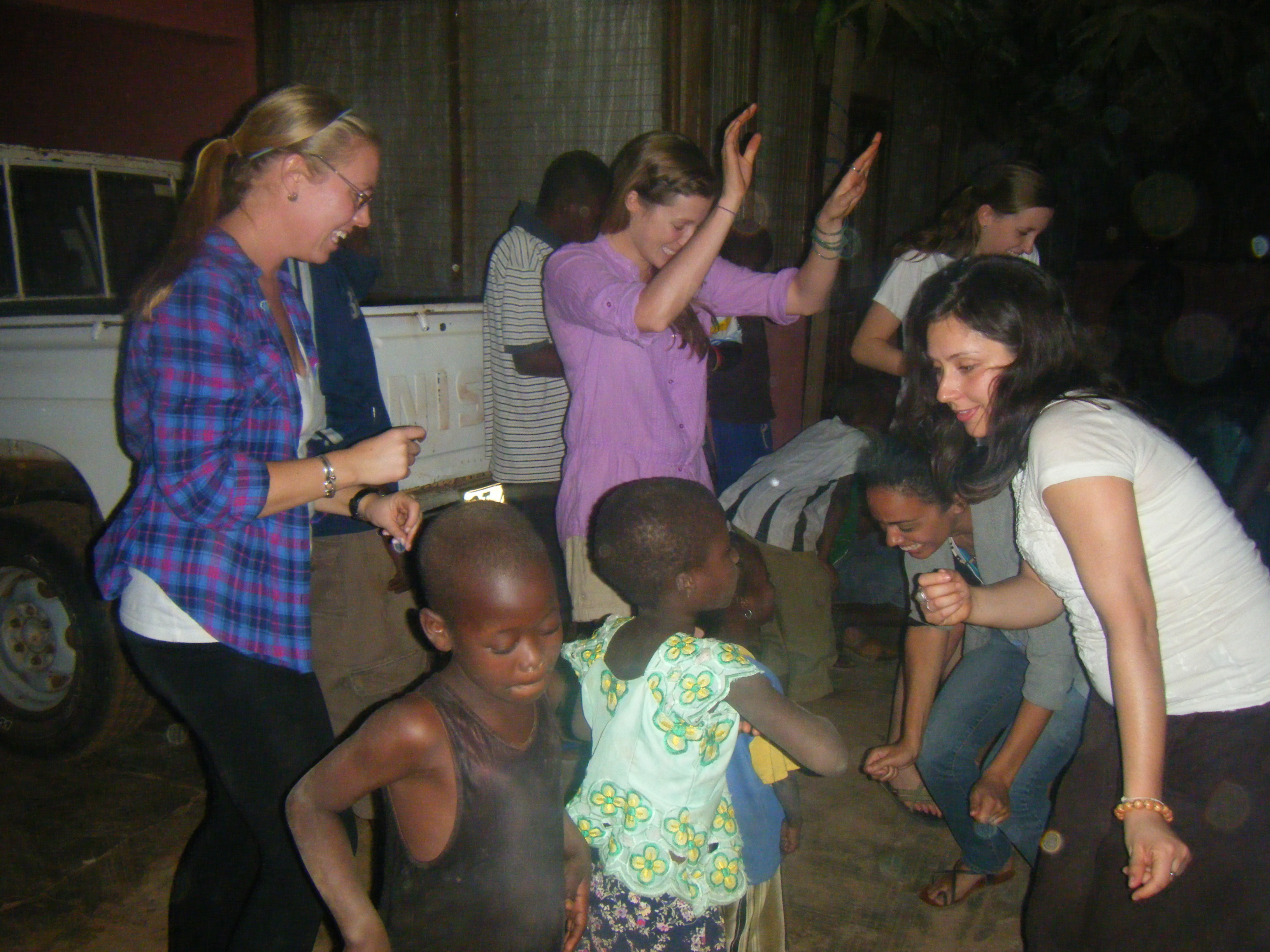 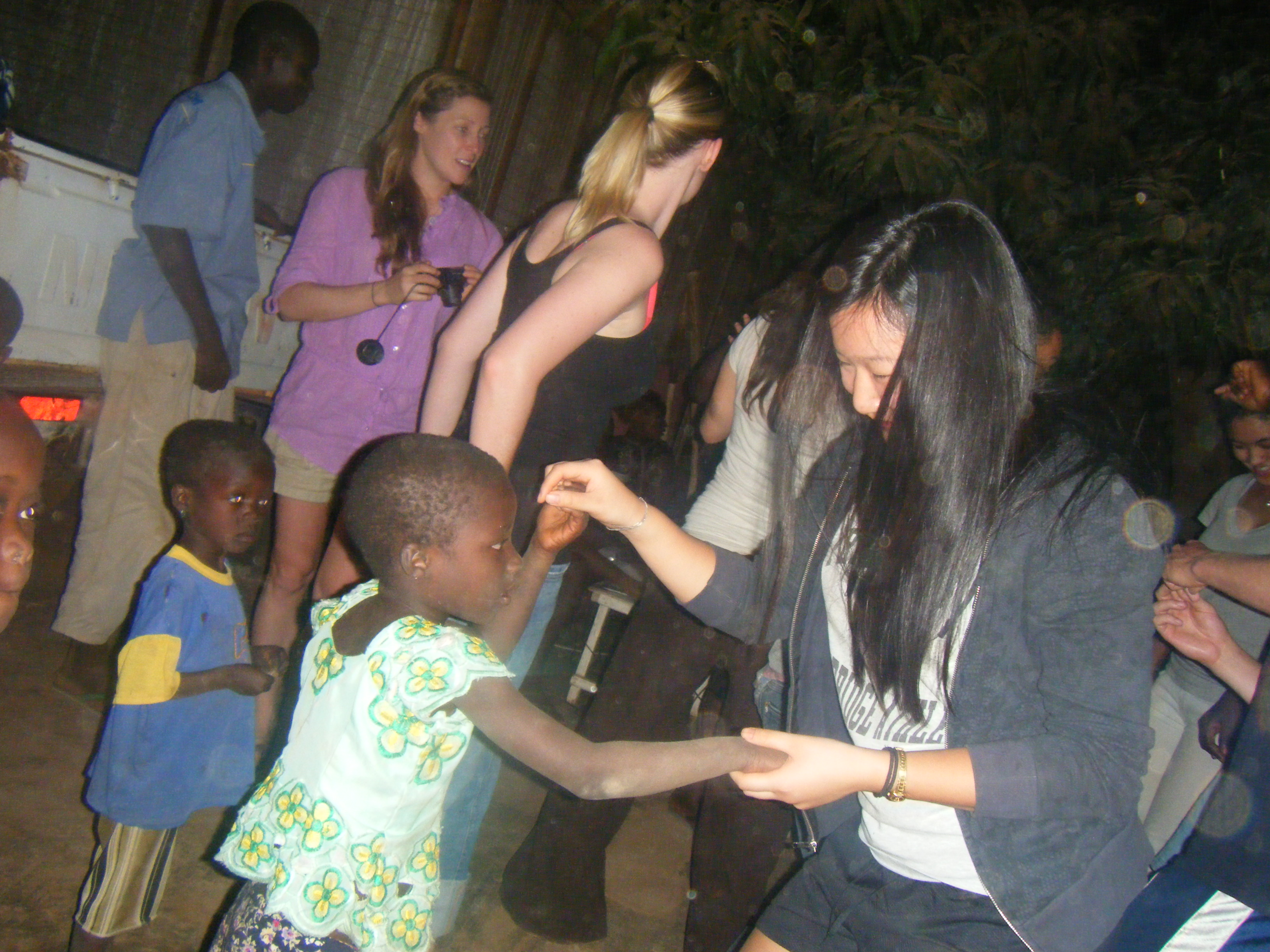 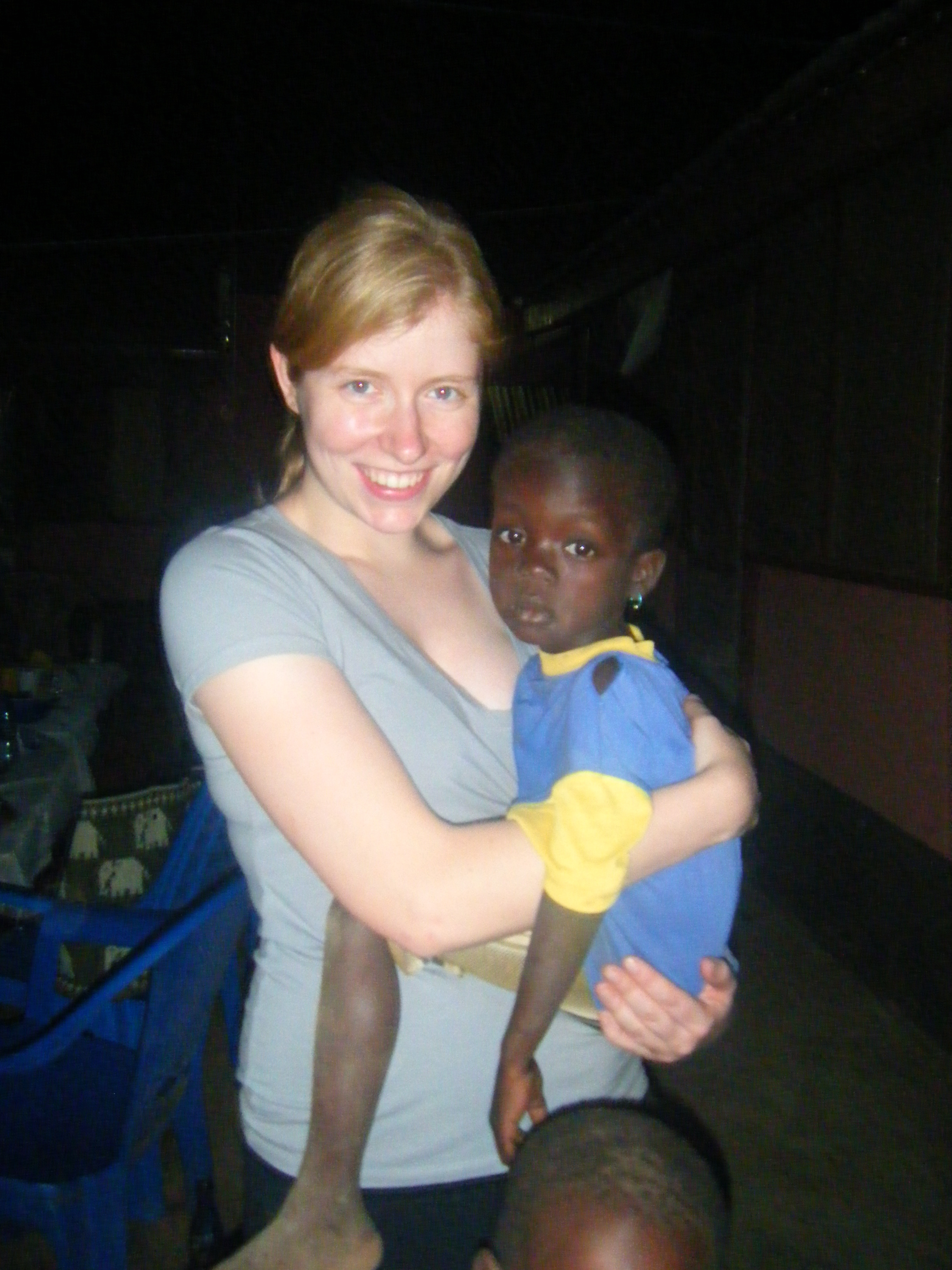 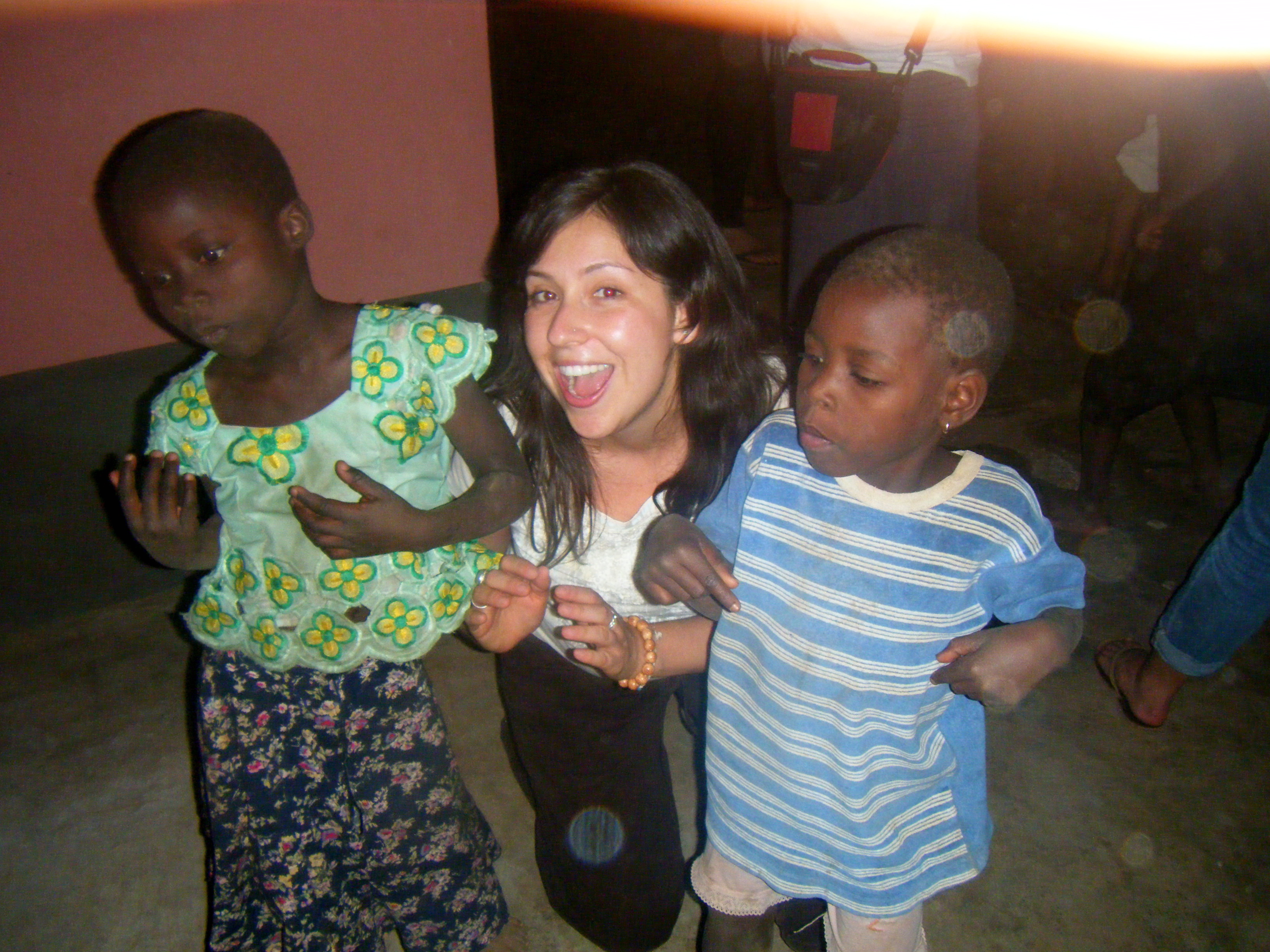 Today was amazing.  It is hard to believe we could top the past week of awesome events and yet we have.  The people of Team 2 and the village of Yipela, especially the women, made it super special.  In the morning we built the stand for our polytank.  Our village really took ownership of the project.  We traced and retraced the design in the sand where the men had chosen to build the center.  Nearly 15 men came down to assemble the stand’s walls, cutting the cement bricks as needed.  Then came the cement.  The men said that Sarah and Hannah did not need to help because they were women and visitors, but Hanna would not take “no” for an answer.  As  Hannah used her hands to cement the bricks together, Sarah and a woman from the village jumped in, too.  This woman was superwoman #1 of the day.  She did the work just like the village men even though she was the only woman and she is going to help run the center.

Our surprise of the morning was receiving the household list we’d requested in our chief meeting the previous day.  We did not have 30 or 40 families, but 128 – a number nearly double what CWS had thought was most likely the village size!  So, we returned in the afternoon with Wahab, a second translator, over 100 safe storage containers, and Cam’s brilliant plan for mass distribution.  Nearly 300 people – men, women and children – gathered around the tree to hear Cam and TJ’s initial speech about how to use the “special containers for drinking water.”  Then we moved right into phase two: distribution.  TJ called out names and handed out buckets before sending people in groups of 10 to Cam.  Then Cam and Wahab reiterated the rules before people brought the buckets home.  It was so exciting to watch children running into the distance carrying a bright blue bucket.  Meanwhile, Nate, Sarah and Hannah had an extremely efficient assembly line going.  Nate cut the buckets open, Hannah taped the taps, and Sarah screwed the taps into the buckets.  In the middle of this process, we met superwoman #2.  This awesome woman danced her way from the crowd to TJ and continued dancing all the way to Cam.  She was probably around 55 years old and got the whole village cheering!

By the end of the day, Cam’s voice was hoarse and Nate, Sarah, and Hannah had  extremely sore hands.  But it was well worth it.  We had handed out nearly 70 buckets! We probably did the last 15 by flashlight before calling it a night.  We drove home giddy with excitement, listening to the only song that plays without skipping of the truck’s cds on repeat.  Team 2 has now heard the same Don Carlos song for 6 hours and the only line we can decipher is, “I woke up this morning.”  Who could have predicted the day we would have when we woke up this morning?!  We cannot wait for tomorrow! 🙂

For the next week or so, the teams all went off to implement what they had spent the last week learning.  They met with their chiefs and elders, built and assembled their treatment centers, trained the village women to run the centers, and distributed safe storage containers to all the households in their communities. In the end, it turned out that Chani had 28 households in their village, Yipela had 171 households, Kpallabisi had about 170, and Zamzugu had 71.  At the end of a week’s time, the fellows had helped bring clean water to 440 households, or ~3,520 individuals! Since I couldn’t be in all the villages to report their progress, and the teams were working independently on their implementations, I thought it would be nice to have each team report on different aspects of their projects from the week.  The following blogs will be their words.  Enjoy! 🙂