After a long, dusty taxi ride, we finally arrived in Changbuni, eager to establish a relationship with the community we would be working in. When we pulled up, many of the kids were already gathered, and even more came running when they heard news of our arrival. We introduced ourselves to one of the adults, who then, to our surprise, eagerly ran to get the chief from farming.

We (somewhat nervously) entered the chief’s hut, and went through the formal Dagbani greetings. This was the true test of how much we’d learned from Shak’s Dagbani training session a few days prior. We definitely stumbled over a few phrases, but the chief and elders seemed to appreciate our efforts nonetheless. Jen began explaining the Saha mission and the specifics of the clean water business we wanted to start. After the pitch, the chief said something that made us all realize what’s really special about Saha. He said that when we first arrived he thought we might be drilling a borehole or something mechanical, which has the potential to break. He said that he was grateful that this project fit the needs and wants of his community. Earlier, upon entering the village, we noticed a structure and tank for rainwater harvesting put in place by another NGO. When we asked the villagers about it, they said they had used it in the past, but it was currently empty. This made us realize that sometimes a simple approach is best. Rather than trying to replace their dugout with another water source, we hoped to give the community of Changbuni the tools and opportunity to be self-sufficient with the resources that they already have. 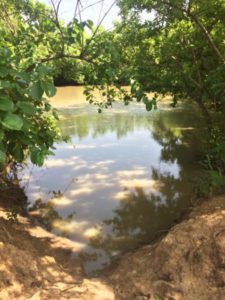 After the chief meeting we asked to see the dugout to take a water sample. Even in a taxi, it was a rather long distance. We took our sample and scouted a potential location for the center next to the dugout. Next, we went to see the river that the village uses in the dry season, when their dugout runs dry. We were warned with a chuckle that it was far away, but none of us were prepared for how far away it actually was. After driving the taxi for as far as the path would allow, we still had another thirty minute walk to the river. 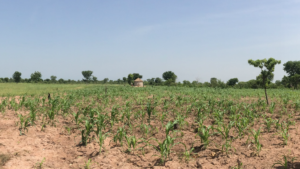 Luckily it was a scenic walk

We took our water sample and started the long walk back to the taxi. It was humbling to experience even just a small fraction of the work women do on a daily basis to provide for their families, and frustrating to realize that the outcome of their efforts was still unclean water that made them sick. This experience added perspective and motivation to the work that we would soon be doing.

Samples in tow, we were set to leave Changbuni after a successful first day. First, though, we went to say goodbye to the chief. We told him our plan for the next day and began our goodbyes. Then the chief said something to a younger boy, who then left the hut. To our surprise and bewilderment, he came back carrying a live chicken. The chief wanted to give us the chicken as a token of the community’s gratitude. We were a bit shocked, but grateful, and thanked him for the gift. 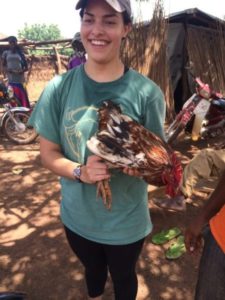 We left Changbuni (with the chicken in the trunk with our translator!), satisfied with how our first day went and excited to come back! 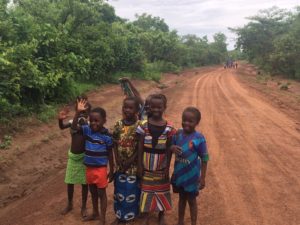 Yesterday, we completed construction of our water business in the village of Sankunpe. Construction involved the heating of screws over a fire started with leftover paint thinner, the chaining of blue drums to discourage theft, and some polytank plumbing work. To prepare the polytank to hold the water, Julia jumped inside the tank with a sponge and shea butter soap from the market and got the job done!

Once construction was finished, we commenced training the women entrepreneurs. We focused on alum training which is the first of the two steps in the purification process. Aluminum sulfate is a flocculent used to separate the sediment from the dugout water. In its usual state, dugout water resembles chocolate milk due to its high turbidity. The women were already familiar alum and took the alum balls from us and confidently stirred them in the blue drums. 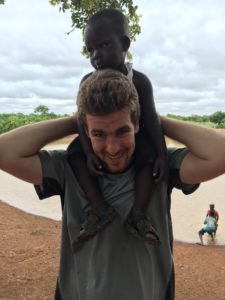 This morning we arrived in Sankunpe expecting to find three blue drums of clear dugout water with the sediment settled at the bottom. Much to our surprise, the water was still full of sediment. We did not account for how the turbidity of the water is higher at this time of the year. As the dry season comes to an end, the water levels of the dugout are low causing the high turbidity. 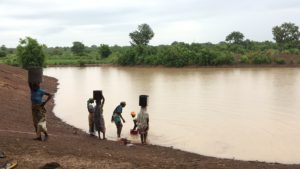 We re-treated the water with our women entrepreneurs, explaining what had gone wrong, and waited another 30 minutes to confirm that the treatment worked. Tomorrow we will transfer the fully-flocculated water to the polytank to be treated with chlorine. Fingers crossed that we will be sipping potable water very soon!

Also, in other news… Sam fell madly in love with a goat named Regina.