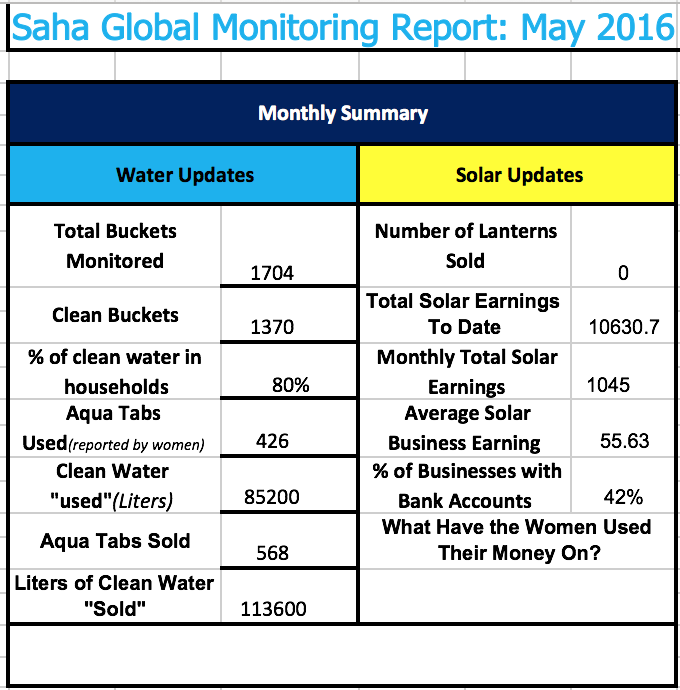 We are happy to report that, once again, 80% of our households had clean water in their safe storage containers. We are very excited about this number and look forward to seeing it increase further! This month, there were a number of communities with high water sales. These villages include: Nekpegu, Chihigu, Vogyili, Kagbal, Balomposo, Wambong, Galinkpegu, Kideng, Gidanturu, Futa and Komonaayili. We are especially impressed with Chihigu, Galinkpegu, Futa, and Kombonaayili because they were recently implemented this past winter. Two of our solar communitites, Chandanyili and Wambong, had high solar sales this month. Although they don’t currently have bank accounts, Sagbarigu, Chadanyili, Kpalguni, Gundaa, Namdu I and Namdu II plan on opening bank accounts very soon!

Although some communities have received rain, the following communities still have very low dugouts: Djelo, Buhijaa Tindan I, and Chandanyili. When the dugouts fill back up, women entrepreneurs are encouraged to inform their community that their centers are regularly running again. This month, Namdu II, Kuldanali, Manguli II, and Djelo had polytank issued that were fixed by our full time staff. Most polytank issues are leaks from the tap, which can be fixed with new parts or just glue and tape! Additionally, Gundaa’s solar center had a leak in the roof that had to be immediately fixed and Jangbarigiyili experienced loose wires after a storm that were fixed with the help of our full time staff. Sagbarigu informed Wahab that they were not given any spare batteries after implementation of their solar business. Businesses are given 10% extra batteries for their solar centers to use as others are charging. Wahab plans to bring these to the women entrepreneurs as soon as possible. 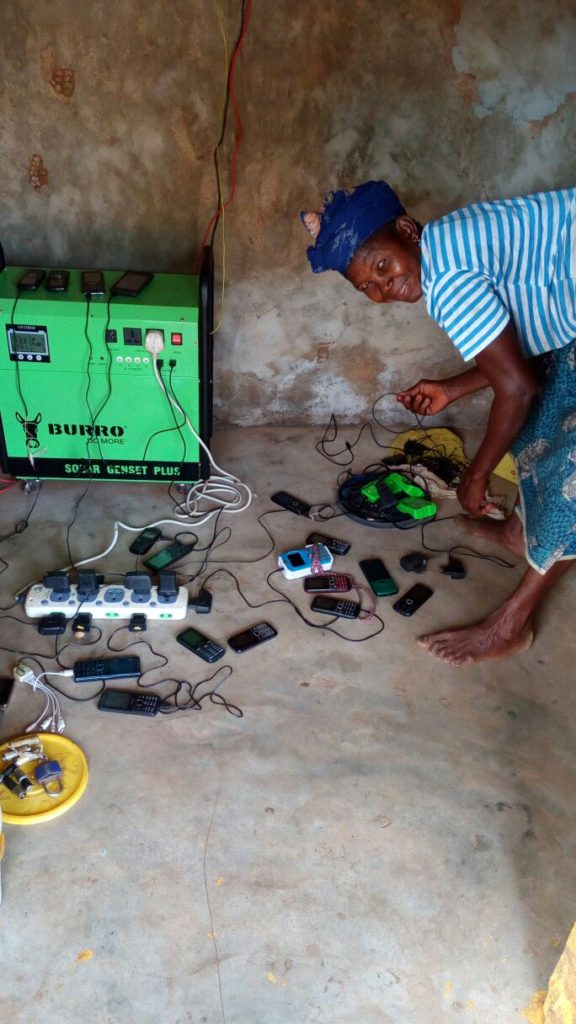 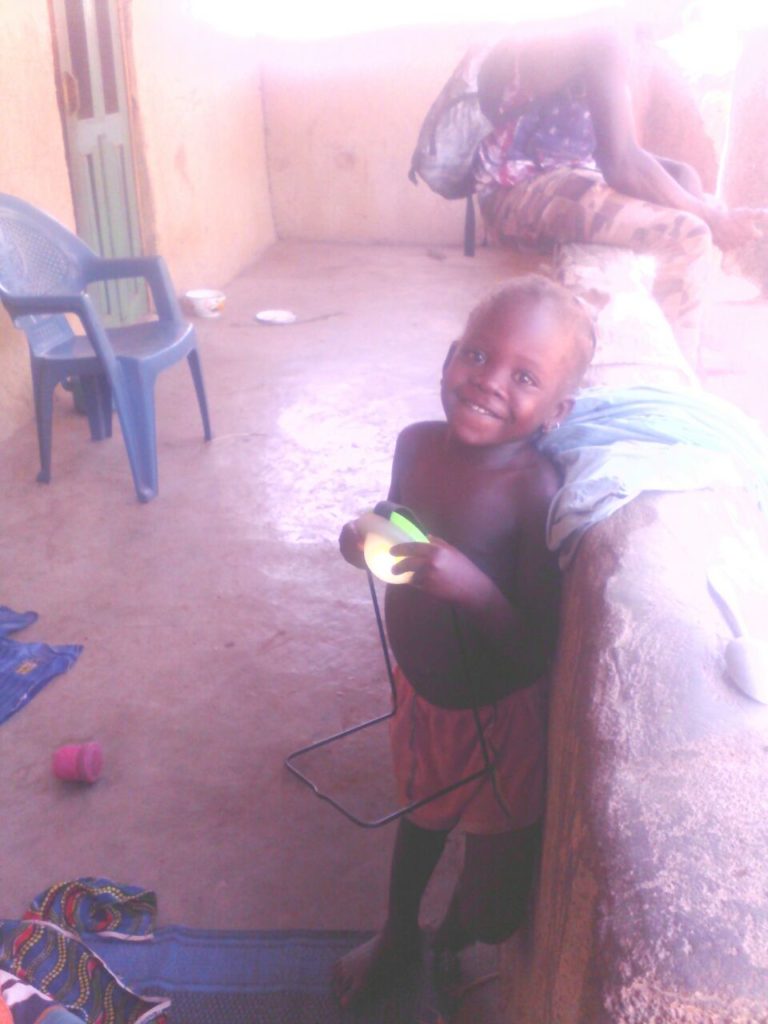 Over the course of the of the past week and a half our team has been working in the village of Vogu-Gundaa which is about an hour’s drive outside the city of Tamale. Saha Global implemented a clean water system in this community 2 ½ years ago and now we are working to install a solar center to provide the community with clean electricity. During our meetings with the chief and the community we learned that they are currently using kerosene lamps and lead acid batteries to power flashlights for lighting. They have experienced the harmful effects of these products but do not have other options to have light in their homes. Our goal is to install a solar center that can charge reusable batteries for lanterns as well as charge cell phones and other small appliances.

These past few days we have been working to construct the physical structure that will house the solar center. Yesterday we worked with the community to set up the solar panels. We also started to train the women who will be running the business. We are very lucky to have 4 women that currently run the water business in the village and who will also run the solar business. Miriam, Abebeta, Awaab, and Fati have all been very excited about learning how the system works and getting started with the solar business. The typical Saha business only has 2 women running it but we have found that with 4 women there is a lot of energy for this project and they are wonderful at working together. We are very proud of how well they are doing and excited for them to run this business!

The next step of training was putting the system together. Today we disconnected everything and they put it back together independently so they knew how everything works. We have been talking them through the processes and it was so great to see their excitement when they flipped the switches and the lights came on showing that the batteries and phones were charging. This is great progress for this community and it was awesome to see how happy they are about this potential.

Now that we have installed the solar system itself and begun training the women, our next steps are finishing their financial training and beginning distribution of the lanterns to the community. We have 43 households in our community and each will have the chance to purchase lanterns for a very reduced price so every household can afford it. Everyone we have talked to is very excited about the prospect of having lanterns in their households to provide light for cooking, studying and nightly chores. They are also very excited to charge their cell phones in their own community rather than traveling to town to do so. We have had a great time working with the women and the community, and are very excited to see this business prosper for the social and economic benefit of all members of Vogu-Gundaa. 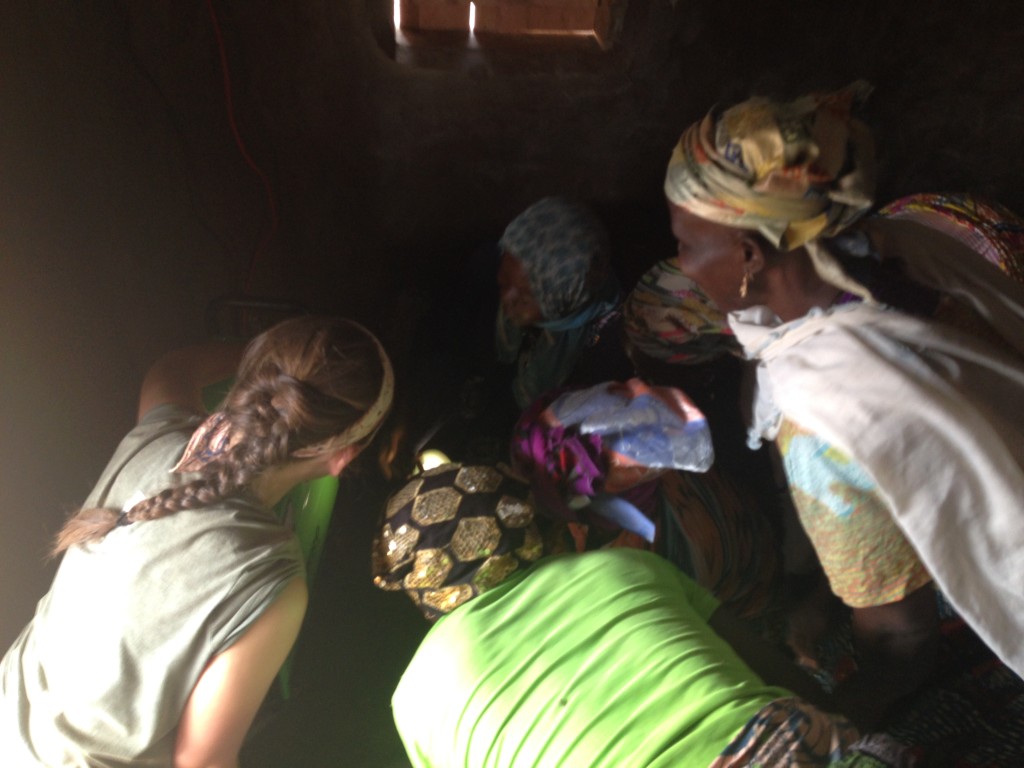 Our team consists of Angie, Kirsten, Ethan, Sarah and our translator, Nestor. We’ve been working in the village of Gundaa, about an hour west of Tamale. Our village has about 40 households, divided into New Gundaa and Old Gundaa. Their current source of drinking water is a dugout that is about half a mile from Old Gundaa (the center of the village).

The first day we visited Gundaa, we met with the chief, sub-chiefs, and elders to pitch the idea of a CWS Water Treatment Facility. They were totally onboard, super excited, and extremely thankful! The chief acknowledged that the dirty dugout water they had been drinking was making them sick. He said, “From now on, we will only be drinking clean water!” When we explained we would be working with them over the next two weeks, they even offered to build us our own hut. We organized a community meeting for the following afternoon, so that all of the women in the village could attend after spending the day in the farm (puni). There were over 100 people in attendance.

Our community meeting began with a prayer for a good meeting, led by the assemblyman. BAM! A table that many people were sitting on fell to the ground. Luckily no one was hurt and the assemblyman joked that the prayer hadn’t reached the sky yet. We each took turns explaining parts of the CWS concept and the work we would be doing. Everyone at the meeting was really excited and loved to see the visuals we brought with us (bacteria tests, a safe storage container, and our Fellow handbooks).  At the end of the meeting, the community began to sing a song that involved the women clapping, singing, and yodeling. They sang us two songs – the first was a song of appreciation and the second represented the idea of “united we stand, divided we fall”.

Tomorrow we’ll start building the polytank stand that will be near the dugout under the shade of a tree. We’re super excited to start tomorrow and we can’t wait!