“Chew and Pour” refers to the teaching method typical in most Ghanaian school systems that focuses on repetition and memorization. It is the difference between a lecture versus a hands-on activity. In the past year, we have been trying to focus our interactions with the community away from lectures and towards conversations. Instead of lecturing about the importance of clean water, we have been emphasizing more on the conversation around clean water and allowing our communities to come to the same conclusions. “You should ____ ” and “Stop doing that” have turned into “Why do you ____?” and “Do you think ____? ” . We’ve learned that it is a more effective way of sharing an idea or concept if they are able to draw their own conclusions through participating in an active engaged dialog. This month, we tried to take this technique of conversation and curiosity and apply it to the way we talk about children’s education. So, this year is the start of our Children’s Education Month!

This years Children’s Education Month ran from June 20th to July 26th which is the last day before kids (kindergarten, primary, and junior high) children go on break. We kicked off the month by introducing a Children’s Education and Parent Discussion Handbooks to our staff to start trying out in the field. It included key concepts to go over and suggestions for types of questions to help encourage participation in the conversation. The goals of these conversations was to learn about the challenges that parents and children face in having clean water available for children/getting children to drink clean water, how to promote good WASH habits, and ways Saha could help support the effort to have children drink clean water. The children are the future of all our communities, so it is important for us to help encourage these good habits and understanding at an early age, so they could continue to on to a strong adulthood.

This year we were able to do Children’s Education for 16 Villages: Nekpegu, Tohinayili, Kalinka, Baiyili, Dawunyili, Sagbarigu, Lambo, Juni, Yendanyili, Jagberin, Tijo, Tindan, Bamvim, Wambong, and Warivi. In the classrooms, we printed out “Commitment to Clean Water” posters where students pledged their commitment to clean water.Some of the Children’s Educations happened in schools some were done informally with a collection of kids in a village. Education can happen anywhere, not just in the classroom! (I would argue that most learning happens outside of the classroom anyway.)

In addition to the formal gathering of children, we also encouraged monitors to talk to kids and parents in their households while they conduct their normal monitoring visits. When I went with Nestor to Sahanaayili, we talked to each household about children having access to clean water. Every household we visited had a clean water cup/container just for their kids. The parents would watch over the children to make sure they were taking care of their cup/container properly and not recontaminating the water. It was so great to see! The children were also excited about it. We talked about one of the challenges that many households face: Children playing with the tap. The households in Sahanaayili each said that they would serve the children what until they were old enough to learn how to use the tap properly, then they would be shown what to do and what not to do. The older kids were helpful in making sure the younger ones used it properly. This hope is to help communities who are struggle with advice from those who have been doing well.

One of the challenges we learned that children face with regards to drinking clean water is that sometimes they have a hard time telling their parents that they should have clean water in the household for fear of it becoming disrespectful. So, even if they knew that they should be drinking water, they couldn’t always because their parents wouldn’t get the water. This insight reinforces our efforts to talk to parents more and frame more conversations around the children and their health. Additionally, Wahab (who was the one who had this conversation with the kids) also made a great point saying if your parents were to walk on a hole and potentially break their foot. It is okay to bring up things that are good for their health. Approaching children’s education from both angles (parents and kids) has been a great tool to encourage children to drink clean water.

Several Saha staff signed up for an online course called Prototyping 201 hosted by Acumen which overlapped with Children’s Education Month. We used this coincidence as an opportunity! For our first practice of prototyping, we took an idea and made physical prototype out of it and our inspiration was Children’s Education Month. So, we brainstormed ideas on how to talk about drinking clean water with children in 3 situations: at home, in school, and in the community. The team was able to come up with fantastic ideas! For the conversations at home, Seidu, Rhiana, and Kathryn prototype stickers for children to indicate good and bad WASH habits. In the schools, Simply and I prototype a coloring book called “Healthy Hadija helps Silly Sana” where a little girl helps her friend learn how to keep clean water clean in the home.  For the community conversation, Theo and Sita developed prototype for a microscope to help kids, parents, and everyone see what is really in their water so they can learn that clear does not mean clean. It was an incredibly fun exercise and amazing to see the creativity of the team! Hopefully these creative ideas keep going and eventually turn into new (fun!) ways of communicating our ideas to our communities.

The biggest thing we’ve learned this year is to just talk about it! Incorporate these questions about clean water for children in our everyday interactions in the villages. Engage with the children. Engage with the parents. There is a lot to learn from them when we get them involved in the conversation. The hope is not just to have these conversations one a month, but every day!

Oh what a month! I would like to thank the team for their input on the handbooks an going out and having these school educations and these conversations. Thanks for all your hard work this month.

I’ll end with a quote from my favorite song in preschool, why this was my favorite song as a preschool is beyond me, but young Heidi was very wise “I believe the children are our future. Teach them well and let them lead the way.”- “The Greatest Love of All” by Whitney Houston

Monitoring has been busy since the end of our Winter Global Leadership Program (shout out to our #sahappytobehere crew!). As you might know, we opened our 100th water business in January, which means 100 villages to get out to and check up on! Here’s the latest from the first 2 months in our newest communities:

And our newest solar businesses:

Special thanks to our Winter 2017 Field Reps who got these 9 communities off to a great start! Ti paya pahm! 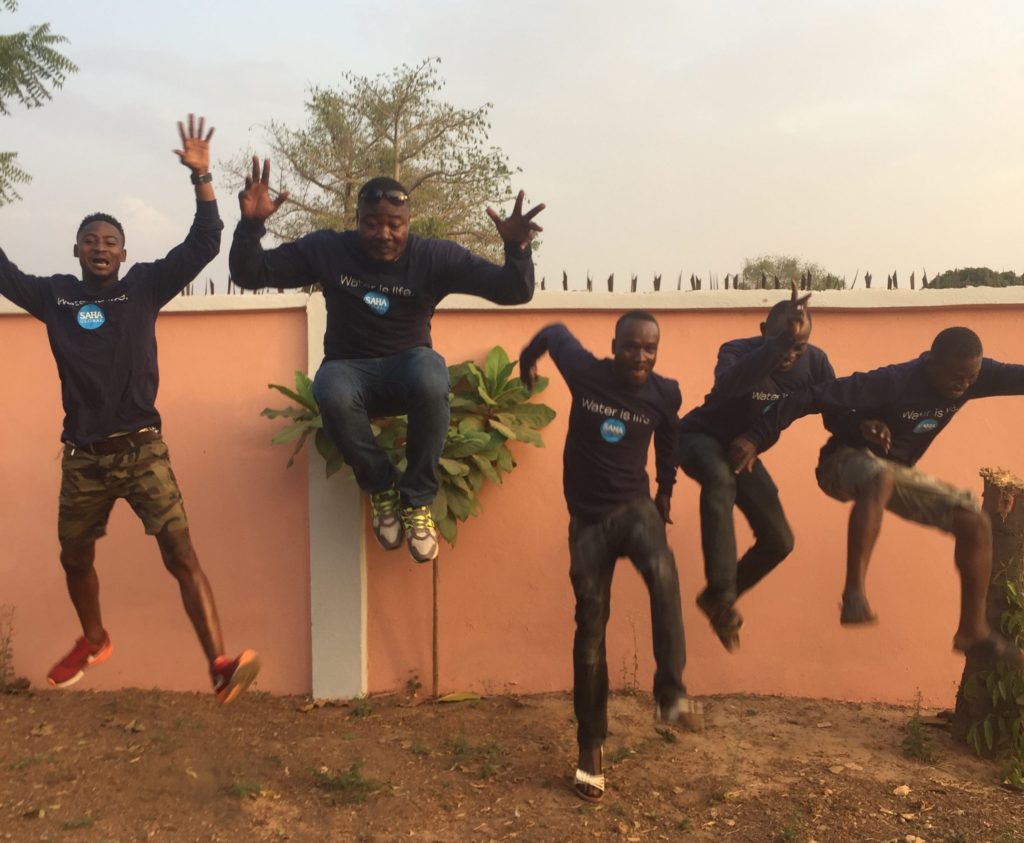 It’s crazy to think that less than a week ago we were saying farewell to the 2017 Winter Field Reps. Thanks to this group of awesome, driven individuals, Saha was able to partner with with 9 communities in Northern Ghana to open 7 new water treatment businesses and 2 new solar charging businesses, which provide jobs to 21 new entrepreneurs. 1,664 people now have permanent access to safe drinking water and 752 people have access to reliable, clean solar electricity. Additionally, 5 of our water entrepreneurs have now been trained to run solar businesses, increasing their earning potential!

We can’t believe that just under a week ago, we packed our bags and loaded up in front of GILLBT for the last time! We are so grateful for the excitement, enthusiasm, hard-work and positivity that you brought to team Saha. Because of you, thousands of people are living their lives with more opportunities for health and happiness. It was such a pleasure to work with all of y’all, and we consider ourselves lucky to count you as part of Sahayili! As you head off to your next impactful adventures, please don’t forget your community and all of us here at Saha, and let us know what we can do to further your missions.

And now … for the jumping pics!

Last but not least, we hear from Team Nestor! They’ve put together a short video about their time in Juni – check it out below! END_OF_DOCUMENT_TOKEN_TO_BE_REPLACED