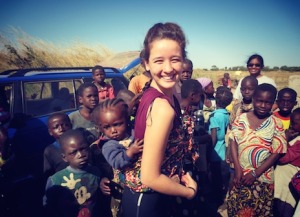 After hearing about the Saha Global Leadership Program (SGLP) from a recent alumna, I was captivated by Saha’s seemingly simple solution to fundamentally better hundreds of lives.  I committed to volunteering when I learnt that Saha goes beyond just providing safe drinking water: it does so in a way that makes economic sense for the women that run them and supports the broader community by using local products.

My three weeks in Ghana were filled with experiences ranging from meeting every family in Tindan (the village that I was working in), to evenings relaxing with other volunteers who had traveled from around the world to similarly devote their time to helping others access clean drinking water. In particular, I fondly remember the day the water purification centre in Tindan opened for business: the village leaders led a prayer while solemnly taking the first sips of the Tindan’s drinking water, the village women queued up in the early hours of the morning to collect their first buckets, the village’s children eagerly followed us around trying to peer inside the containers and fascinated by how the water became clear…  Since coming home from Ghana, I have continued to monitor Tindan’s monthly reports via Saha’s Facebook page, excited to hear about the successes of the women entrepreneurs who safeguard the centre.

My biggest takeaway from the Saha’s Global Leadership Program was an impact-driven way of thinking about time: the experience of providing safe drinking water to hundreds of people in just three weeks incentives me to devote my time to causes that can create meaningful and measurable impact in peoples’ lives.  This mentality helped frame my thinking of future careers, prompting me to devote my time to similarly impact-driven organizations like Grameen Bank’s Bankers Without Borders and the World Bank Group’s International Finance Corporation, which both focus on the role of private sectors’ skills and services in providing opportunities and connecting the poor to their potential.  Now, I am in my final year at Georgetown University’s School of Foreign Service, where I will graduate in 2015 majoring in Science, Technology, and International Affairs (STIA).

Want to learn more about Sarah’s experience or have any specific questions? Sarah would love to tell you more! Feel free to email her at pemberton.sj@gmail.com Also take a look at what she’s up to now!

First week back in Tamale and Hamatan is in full swing! Hamatan is when a dry-dust wind blows in from the Sahara. This happens from late November until mid-March all over West Africa. This Saharan wind engulfs the city of Tamale every year with a thick orange cloud of dust, leaving us with chilly nights and burning hot days.

What does this mean for CWS? Well for the staff it means that we finish our days with an orange dust facemask and dirty feet. For CWS project manager, Peter, it means he comes back from the field with a carrot colored beard. For our 47 communities, the Hamatan wind does not affect water sales per se but the seasonal changing of weather has a big impact on where people get their water.

During Hamatan, it gets drier and drier in and around Tamale. This means that water sources like manmade wells; boreholes and dugouts start to dry up. In many of CWS’ villages, the community water sources change, which creates challenges for the entrepreneurs who run the water businesses. This has several implications. Some women have to close their centers for a few weeks as they transition to treating water from a different source, some have to pay donkeys or motor kings to bring them water to treat and some move their water treatment centers multiple times… All the women are unique in their approach to dealing with seasonal transitions and CWS ensures that they are coming up with a plan that’s right for them.

Fati and Amina aka “Samlenna” or TZ seller are the women who operate the water business in the village of Gbung. When it rains, the women move their center from the dugout to the market in the middle of town and treat collected rainwater. In the Hamatan season,  the people who live in Gbung get their water from a few different places. They get it from a nearby stream and from a closer but smaller dugout that dries up for half the year. No one is collecting household water at the dugout where the polytank initially was built. So for the time being, Fati and Samlenna are paying a motor king to bring them water. The women are working on adjusting the price of water to reflect the increase in water treatment costs. The center is still running despite these seasonal challenges!

In nearby Libi, Cheriba and Ramatu closed their center for a month for a number of reasons. In December, the path to their stream where the polytank stand was initially constructed was still muddy and overgrown. Cheriba told CWS field staff that her fellow community members were getting water from a number of sources. Some people got it from manmade wells, some got it from smaller dugouts and some had stored rainwater. She said that if she opened for business nobody would come. She wanted to wait until people started going back to the stream to collect household water.  Ramatu and Cheriba will be opening for business this week!

Tacpuli was the lowest performing CWS village in October 2012. Lasinche, the woman who runs the water business in Tacpuli was having a hard time getting people to come to buy water post-rainy season. Many people had rainwater stored in their houses and did not want to make the muddy trek to the dugout to buy clean water. Lasinche tackled the problem on her own and moved the water treatment center to a well that was closer and more accessible for the community. Lasinche kept the center at the well for all of December and for the beginning of January. She moved the center back to the dugout and sales are going well for her!

Weather patterns, climate change and seasonal challenges all play a major role in determining where people get their drinking water and the amount of water that is available year round to treat. In Tacpuli, Gbung and Libi, three villages that are very close in proximity to one another, these factors all affect them in different ways.  After working in these communities for a few months, I’ve noticed that the best solutions are formed organically from the entrepreneurs or the community members themselves. As Shak, the CWS assistant project manager always says, “We are not the ones getting our drinking water from the village.” He makes a good point. While CWS works its hardest to make sure all 47 water businesses are running effectively, we will never be able to control the weather and we are not the ones drinking the water. The women and the people who live in these communities need to be the decision-makers for seasonal problems that arise throughout the year. And this goes for all development projects, not just water. 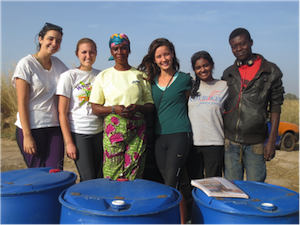 Emily and Lucy (our photographer) went to the dugout and water treatment centre to collect materials for the games, and check on the women (Adamu and Maymuna).After a couple days of distribution and monitoring safe storage containers, the kids of the village were excited about learning healthy drinking habits!

The motto of our first activity was: clear does not always mean clean! We had the kids gather around while Emily and Priya presented them with three water bottles, filled with polytank water, a salt-water solution, and dugout water. We asked them which one(s) they would like to drink, and the two clear solutions were chosen. Needless to say, Abrahim, a little boy of the village, was shocked that the salt water solution tasted bad even though it looked clean. The kids laughed, and we taught them that re-contamination is not always visible, so they should keep their hands out of the safe storage containers.

Next, we played ‘healthy-habits tag’, where we taught the kids safe drinking habits. Three kids were “diseases”, who were “it” in the tag game and, five kids were assigned healthy habits, giving them extra lives in the game. Lauren volunteered as a “disease,” and the young Tindan kids outran her as we all played. At the end, the kids with the healthy habits cards (drawn by Priya!) remained standing which showed how crucial healthy drinking habits are. 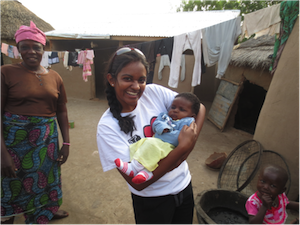 Playing games while educating was a great way to introduce healthy drinking habits to the kids and excite them about their safe storage containers filled with clean water! We are sad to leave Tindan, but we have left the centre in the capable hands of Adamu and Maymuna, and we are confident that the children will practice safe drinking habits!