And the solar center entrepreneurs in Kurugu Vohoyili are (drum roll please)… Ayi and Fuseina! 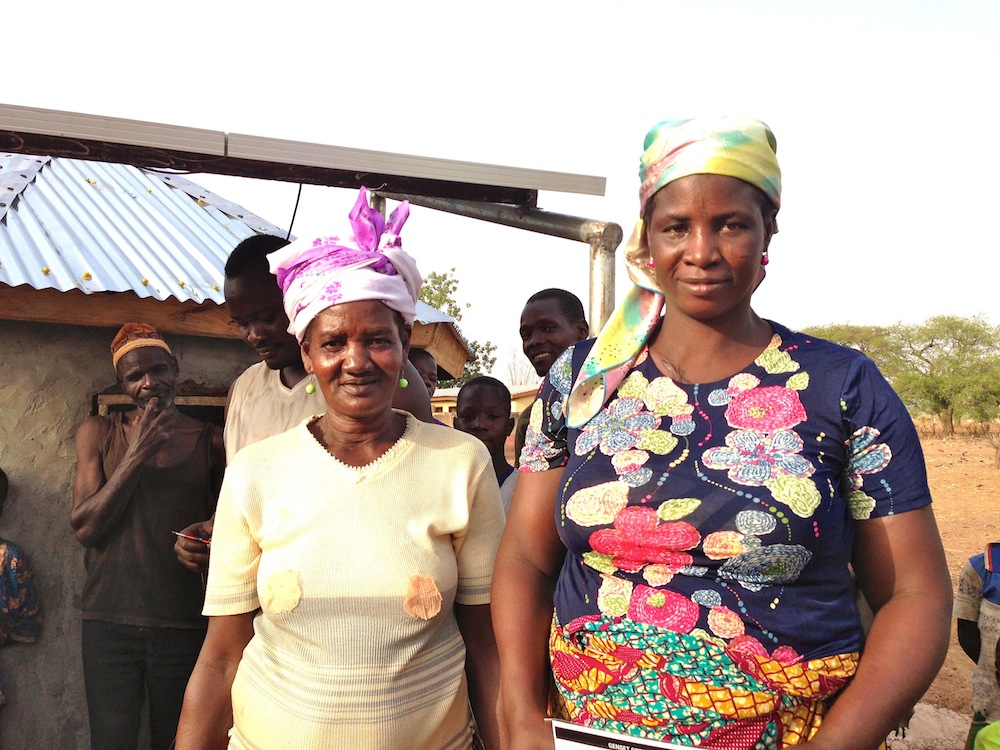 The chairman told Shak and I that Ayi and Fuseina were chosen because they are the most hardworking women in Kurugu Vohoyili. Interestingly enough, Ayi and Fuseina are also the water business entrepreneurs. Now this has pros and cons to it. As we have seen in Wambong, the solar center makes much higher profits compared to the water treatment center. This will allow Ayi and Fuseina to grow their businesses and eventually open a bank account. The entrepreneurs will also be able to market the water business using the solar center. Community behavior change and priorities are different around drinking clean water vs. charging a cell phone. Cell phones are sexy. The immediate reward of being able to call a friend is much more gratifying than drinking a cup of clean water, where the health benefits are only seen over time and are hard to measure. Had the community selected two different women to run the solar center, there would be four women with business opportunities in KV rather than two. Our plan, for now, is to let the communities select the women for the pilots and go from there. Solar power has become a solution for areas that are either not near proper power sources like in modern areas or for economic reasons. No matter the reason, solar power is something that deserves time and money put into it for everyone to use. The grid solar projects like these will bring in massive results for this village and get them utilizing solar power for their needs.

We were pushed back a day again because of a funeral in a nearby village. The dry season is peak funeral season in the Northern Region of Ghana. In the rainy season, the weather is unpredictable, the roads are bad and families are busy farming, which makes travel difficult. Usually when people pass away in the rainy season, they wait until the dry season to have the big family funeral. 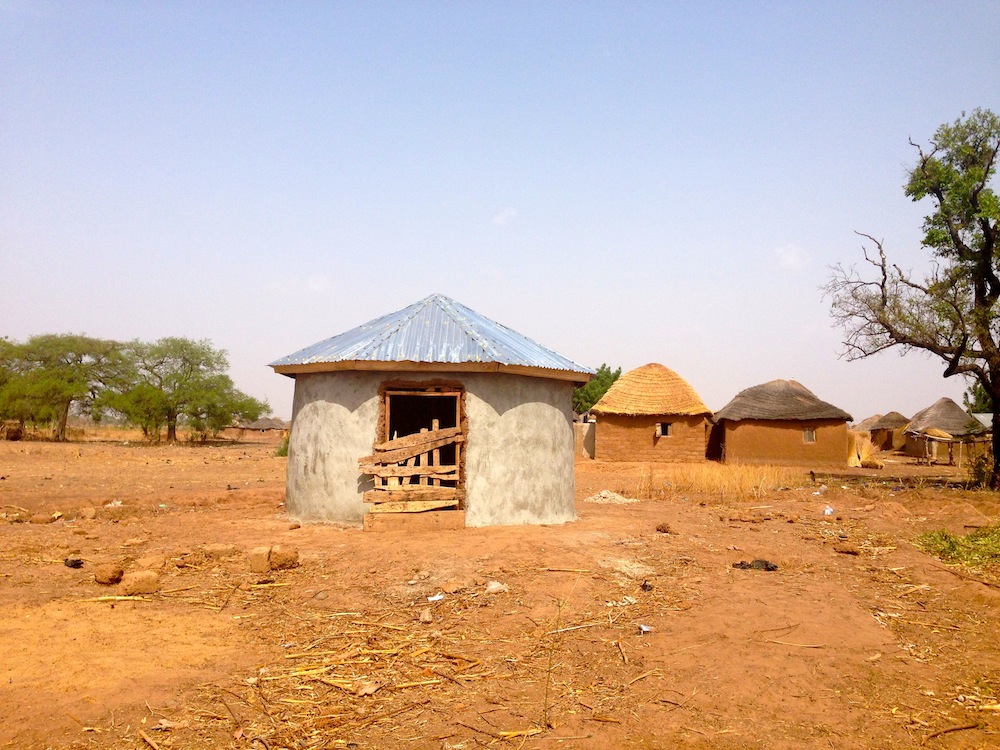 Today, we arrived in KV and the center was looking great, fully plastered and beautiful in the hot sun! We brought the steel poles and solar panels to mount outside the solar charging hub. Community members helped mount the panels. We faced the panels due south at 81 degrees to get the most sunlight possible throughout the year, using this Solar Angle Calculator recommended by staff at Burro. Shak was resourceful and found a protractor to bring to the welder for the poles. He got the angle just right. I was impressed! We used a compass to get the panels perfectly due south! 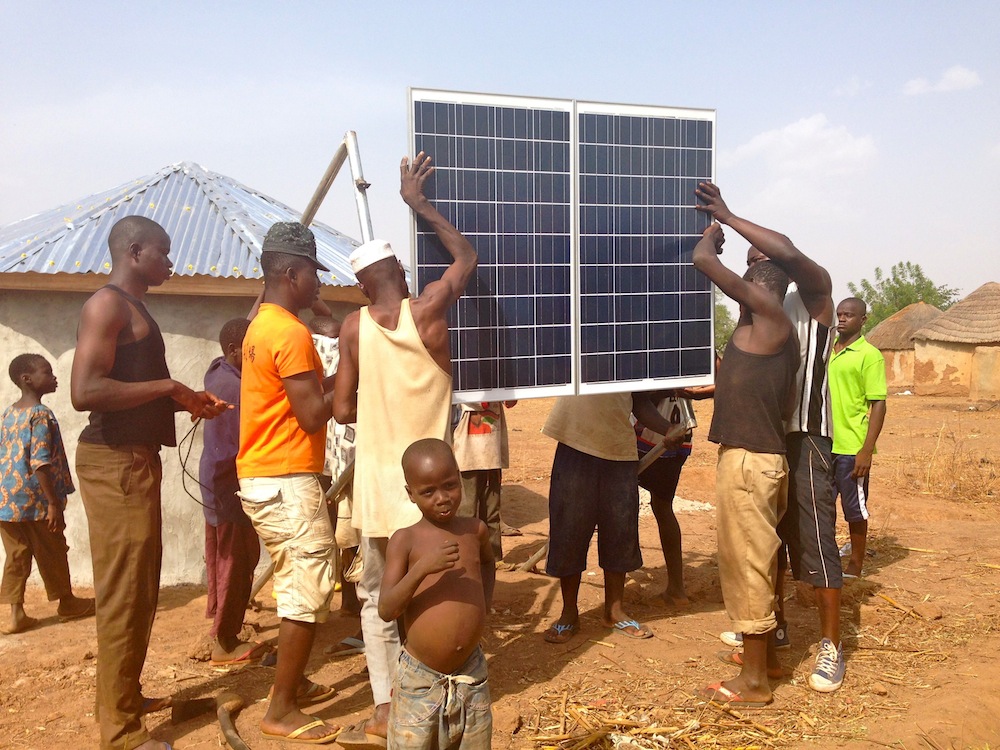 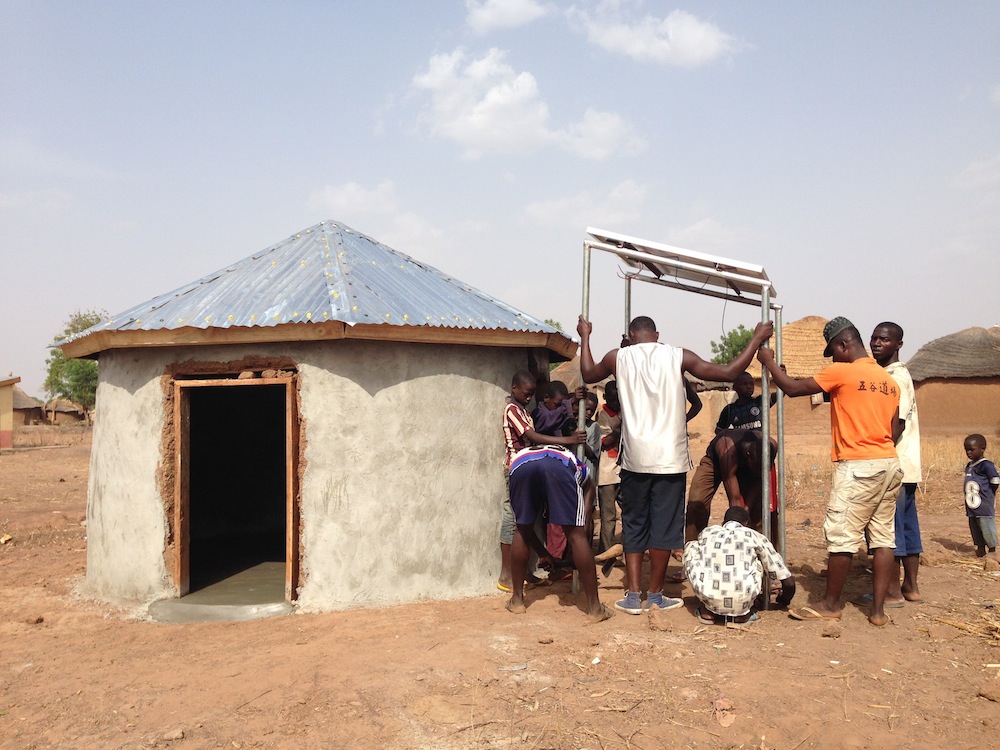 Once the panels were mounted, Ayi and Fuseina came to start their first day of training. They showed up with big smiles, saying “Nawuni ni dey suhugu”, which means God answer your prayers (also used for thank you) in Dagbani. From past experience monitoring and working in Kurugu Vohoyili, I can vouch for these women and confidently say they are “on their game”. Since implementation in January 2012, their water business has flourished. There has not been one occasion where CWS field staff showed up to KV and found an empty polytank. You rock ladies!

For the solar training, we started with the basics, going over how the solar panels use light energy from the sun to generate Direct Current (DC) electricity, which is stored in the battery and then converted to Alternating Current (AC) electricity through the inverter. AC electricity or “mains” as it is referred to in Ghana is what we use to charge our appliances at home. We explained to the women how to wire the 2- 100 W panels together in a “series” connecting the positive cable of one panel to the negative cable of another panel, which builds the voltage. Then connected the negative cable of one panel to the negative charge of the battery and the positive cable of the other panel to the positive charge of the battery. The women did all the wiring and electrical taping themselves! When it was wired, we turned on the genset and voila! There was power! We plugged in a cell phone and a battery charger to make sure the equipment was working. There were oohs and ahhs from the surrounding crowd.

We discussed how to calculate watt/hours and how many devices can be plugged in based on the battery level. Burro put together some useful infographics: Genset Operating Guide that helped us explain this to the women. To start, the solar center will be charging cell phones and Burro AA batteries for the lanterns. We went over using the sales book to keep track of daily cell phone and lantern sales. We gave the women two containers – one for daily earnings and the other for long term savings. We also went over prices with the chairman and the entrepreneurs and agreed upon 10 pesewas (~$.04) per battery rental and 20 pesewas (~$.08) per cell phone charge. This money will go to Ayi and Fuseina, who can use their profits to invest in their families and to replace batteries or broken parts at the solar center.

Tomorrow, Shak and I are going to continue training day 2 with the entrepreneurs, further discussing battery charging, watt/hours calculations and keeping track of sales. We are also going to have the women completely rewire and put together the genset on their own without our verbal guidance. We are confident they will do great! Tomorrow, we will also be approaching households with lanterns to see if they want to invest 1 GHC in a lantern to be able to rent batteries at the center. More updates to come!

It has been a productive week of building in Kurugu Vohoyili. Our efforts were pushed back a day because of car trouble and a funeral in the community on Wednesday. On Thursday, Shak and I arrived around 7:30 am to get an early start on the roof. The carpenters unfortunately were not as punctual as we would have liked. Maybe I could have looked for local roofing professionals (similar to roofers Roanoke) who could have started working on the roof before the carpenters arrived. That said, the morning was spent sitting and chatting with the elders and some of the children.

When the carpenters finally did show, they got right to work. The round zinc roof (similar to the Metal roofing from 99Roofers that is usually installed in the US) was too complicated for me, Shak or community members in Kurugu Vohoyili to construct. So the chairman called his carpenter friends in the nearby community of Tolon. The people of the community have extensive experience in the village roofing industry. Moreover, it seemed that the residents had vast roofing knowledge like a professional from a roofing company Winston Salem might have.

That is why they must be praised! After all, not everybody can be as talented as they are! However, the most praise-worthy thing is that not only do they appear to have skills to carry out complex roofing tasks like Roof Replacement, installation or repair, but they also seem to be in sync with the growing trends in the roofing industry. This surely is praise-worthy as not many people possess this kind of skill set or knowledge base!

Most community members live in round village huts like the one we are building but they use straw to roof the house. We decided to use a zinc roof for the solar center to keep the battery, inverter, cell phones and appliances safe and dry in case of a heavy rainstorm. Straw roofs have more seasonal maintenance compared to zinc roofs, so it made sense economically to go with zinc.

To construct the roof, the carpenters started by adding supportive beams to hold up other pieces of wood in the nailing in process. They went around in circles several times adding wood, nailing it in, taking measurements, cutting more wood, adding supportive pieces to nail in the zinc. At one point the carpenters ran out of wood, so Shak and I headed to Tolon to get more. When we got back to KV, one of the carpenters said they had just run out of nails and that we had to turn around and go back out to get more. It took us a few minutes to realize he was kidding. Shak replied, “That it a very hard joke to make Carpenter”, which ended in roars of laughter amongst the chairman, elders and even some of the small kids. The carpenters completed the wooden roof structure in 4 hours, then took another hour to nail in the zinc. It was a long day but overall a success. We left Kurugu Vohoyili with an almost complete, locally sourced and community made solar center charging shop!

Today, we returned to Kurugu Vohoyili to finish some of the wood work for the door frame, window and faceboards. We started plastering the outside of the hut with cement to make it durable in the rainy season like families do to their own houses in the community. The center is looking great! Tomorrow we will return with the solar panels, inverter, battery, cable, Burro AA batteries and Burro battery chargers to start training the women! We can’t wait to meet them! Check below for pictures detailing the building process. 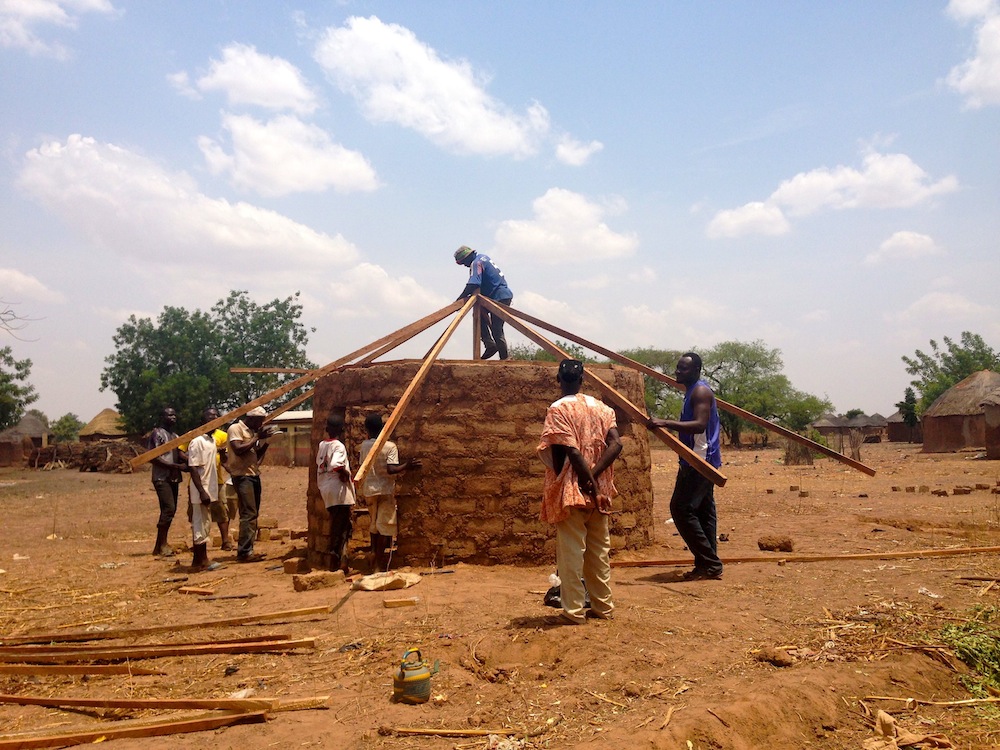 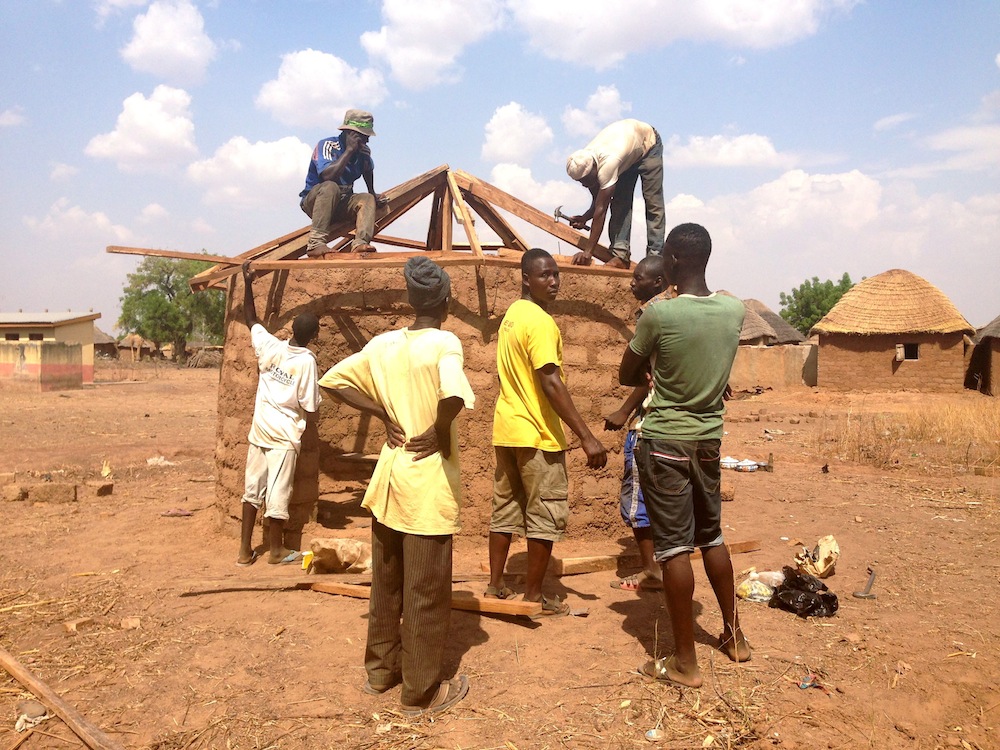