As we waited outside Holy Cross for our translator, Jude, to arrive so we could attend mass with him, it became clear to us that we were all far underdressed. “Sunday best” is not taken lightly in Tamale, as all attendees walking into the church were dressed in a variety of bright colors and bold patterns. When Jude arrived, we walked in together and sat in the middle section of the church, mesmerized by the beautiful color scheme. 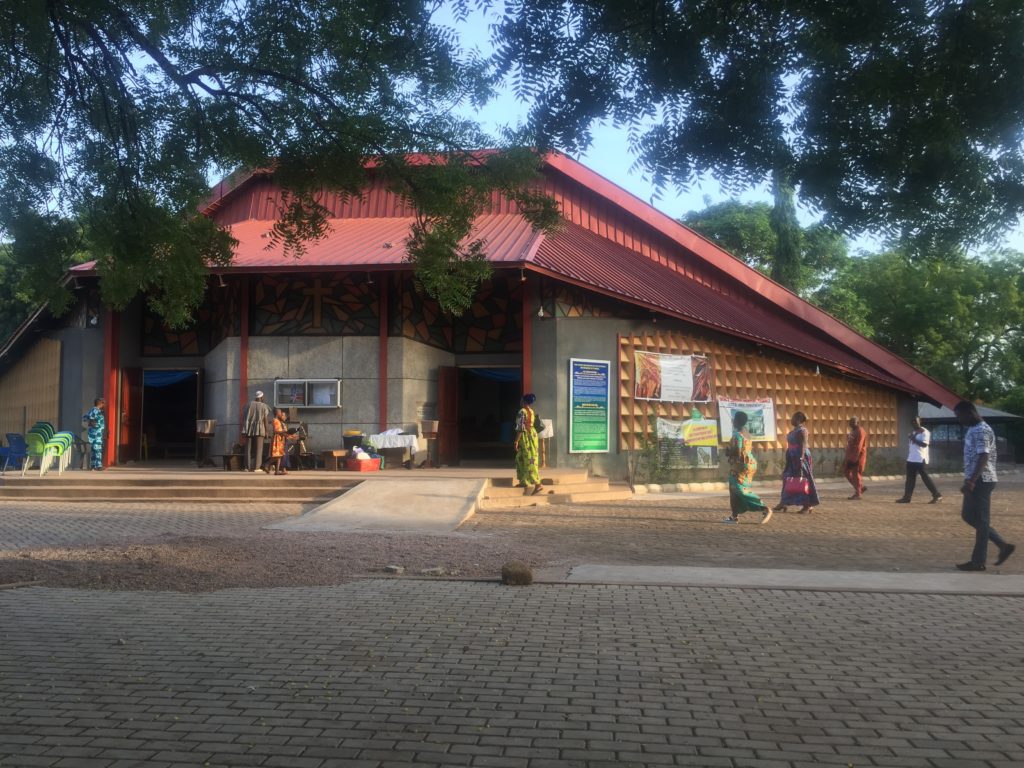 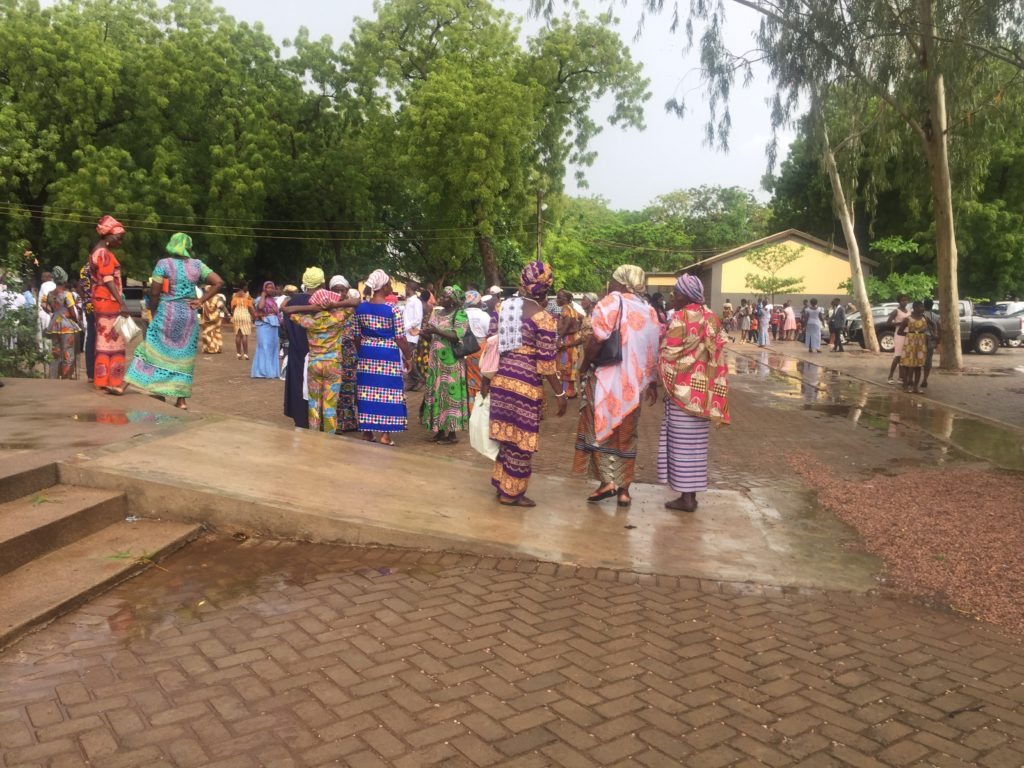 After announcements and prayer requests, the people in the front two rows of the left section rose to their feet. A man started clapping softly and singing as the two rows slowly started to join in, creating a natural crescendo until their voices echoed in the church. Two men sat with drums between their legs and joined the choir singers in praise.

Each of the three sections of the church had a choir in the first couple rows, and each choir sang in a different language. The choirs took turns leading songs, but even the members of the congregation that did not understand the language of the song swayed and clapped along. As Jude told us, even though the members speak different languages, they all come together in unity to worship.

During one of the songs, rain started pouring. The rain smacked onto the tin roofs so thunderously that it almost drowned out the voices. Like a normal Northern Ghanaian rainfall, though, rain fell intensely for about 10 minutes but then let up, leaving only a sprinkle for the next hour or so.

As the last song died down, two teenagers came to the podium and began reading from the Gospel. One read in English and the other repeated in Dagbani, the predominate language in Northern Ghana. The congregation then knelt and we followed suit until instructed to rise and greet one another. We nervously made eye contact with the weekly attendees around us until one of the ladies in a blue and orange sun dress reached out to shake our hands. Others followed, and a dozen handshakes later we considered ourselves members of Holy Cross Tamale.

We filed out of the church and stood outside with Jude and his wife, Joyce, and their two young daughters as they greeted their friends. We had planned to go to Jude’s tailor after the service to have clothes made for us with the fabric we had been buying throughout the trip, but Jude informed us that he was unavailable at that time. Instead, we decided to go back to the market until lunchtime. We headed over to the taxi where Nkatia, our team’s taxi driver, was waiting for us. “Did you pray for me?” Nkatia asked, jokingly. We laughed and responded, “The entire time.”

After shopping at the market and getting lunch at Wooden with Jude and Nkatia, we headed to our village, Bonyase. Like most of our excursions, Jude sat in the passenger seat of the taxi while the four of us had to squeeze in the back. Our seating arrangement only exacerbated the already unbearable heat of the day, and our sweat combined between our arms and legs.

The drive from GILLBT guest house where we were staying to Bonyase typically takes about an hour and a half, with the first hour on the main paved Tamale road and the last 30 minutes on a bumpy dirt road. Bonyase was idyllically situated south of the Volta River, giving the land a lush, green jungle and plenty of room for lots of cattle to roam. As we arrived, goats and dogs lazily lay in the sun. We got out of the taxi and stretched. Aidan headed towards the goats to try in vain to catch one while Kaz, Sophie, and Natalie played with the children. Jude asked one of the children to fetch Howa, one of the woman entrepreneurs, and the boy quickly ran down the trail towards Howa’s compound to get her.

We waited with the kids until she arrived, drawing in the dirt, dancing, and giving a generous amount of high fives. Kaz started guessing each of the children’s names that she remembered from before, and they laughed at our accents and mispronunciations. When Howa arrived, Sophie bowed and said “despa” to her, the polite morning greeting, forgetting it was now afternoon. Jude reminded her, “Sophie, it is not morning, it is the afternoon. You say ahntray!” Howa laughed and responded with the usual “naa.” 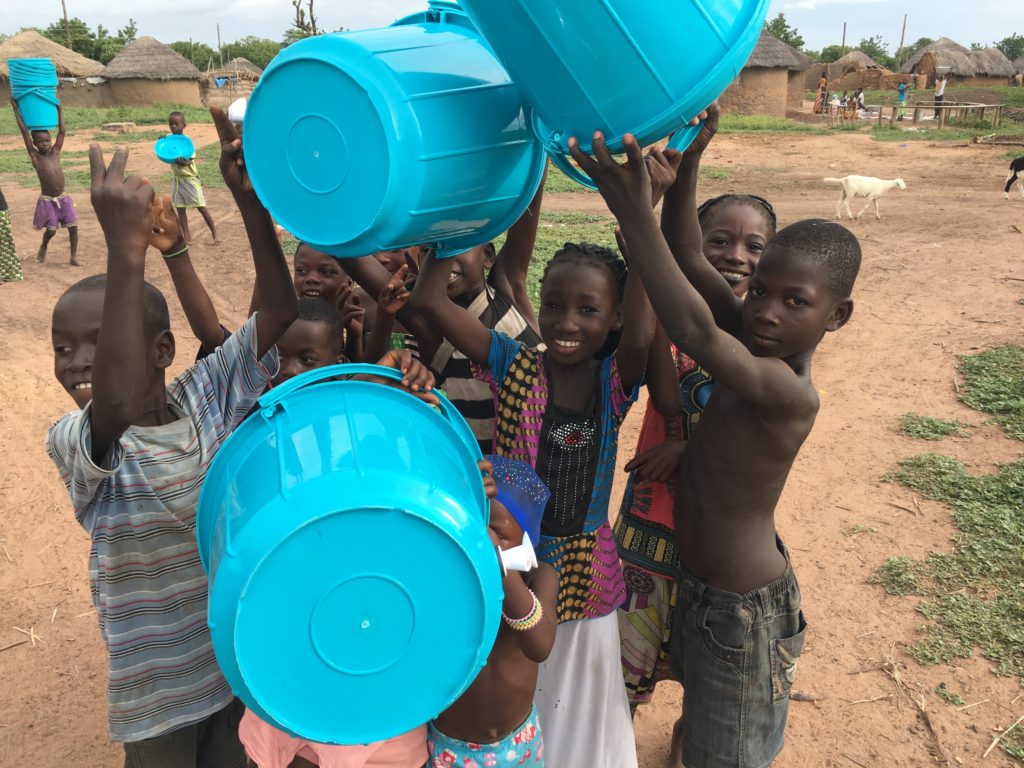 Today was one of our four planned distribution days, so it was going to be a long day. The children helped, though, by carrying our blue water containers from compound to compound as we spoke to the women about what the container was for and how each household should properly use them. Salamatu, one of the entrepreneurs, also decided to take control of the distribution. At every house we went to, she immediately held up the 3M test from the lab. The sample showed the bacteria that was present in the dugout water that the village drinks. Almost everyone that saw the sample was shocked at what was going into their bodies. Lamatu, another entrepreneur, and Howa would cackle in the background at the women’s expressions and occasionally add their own input. 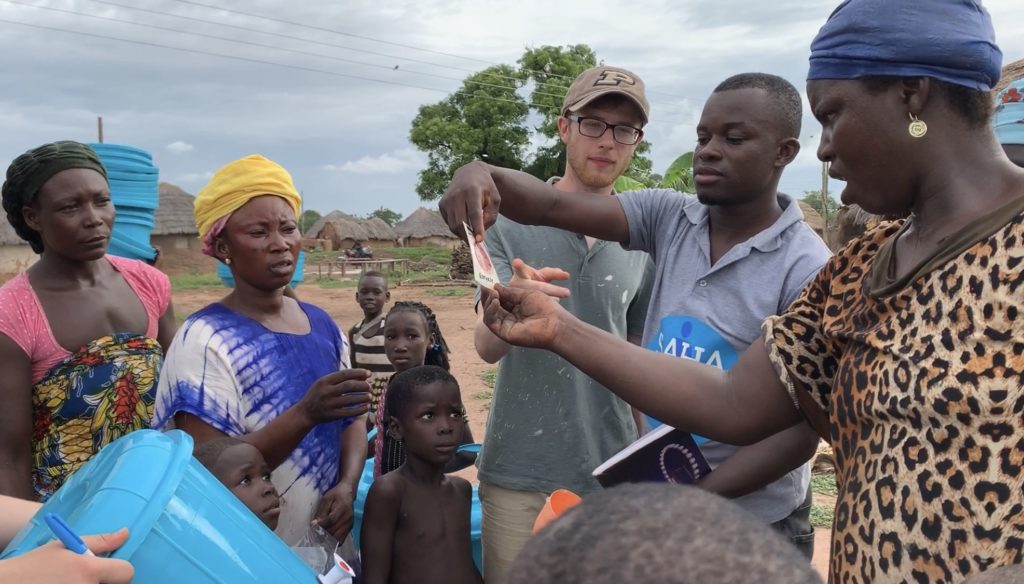 We planned to open the business in three days, so we had to make sure to distribute safe water containers to every one of our 50+ households by then. By the end of the day, we went to fifteen households and distributed over thirty safe water containers which was much more than anticipated. With the help of Salamatu, Howa, Lamatu, and the village children, instead of having a long grueling day in the sun we had a rowdy and enjoyable successful one. 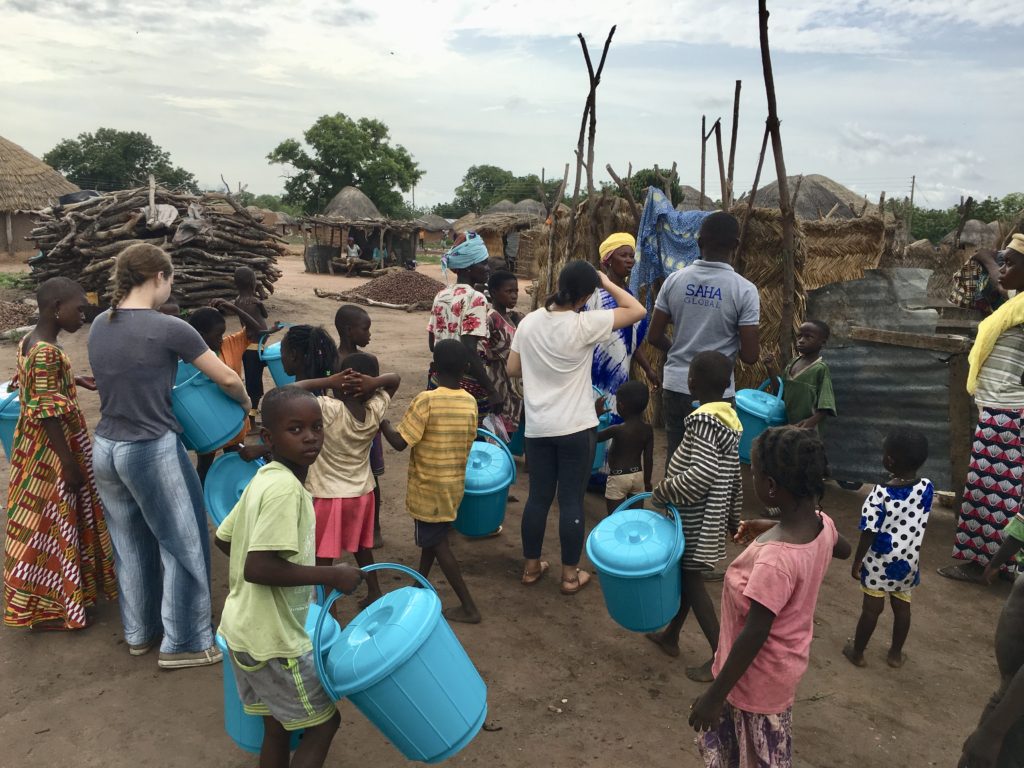