Hello from Team Nestor! Our team consists of: Maggie from Rhode Island, Ali from Brooklyn, Kayla from Wisconsin, and Sarah from Virginia. 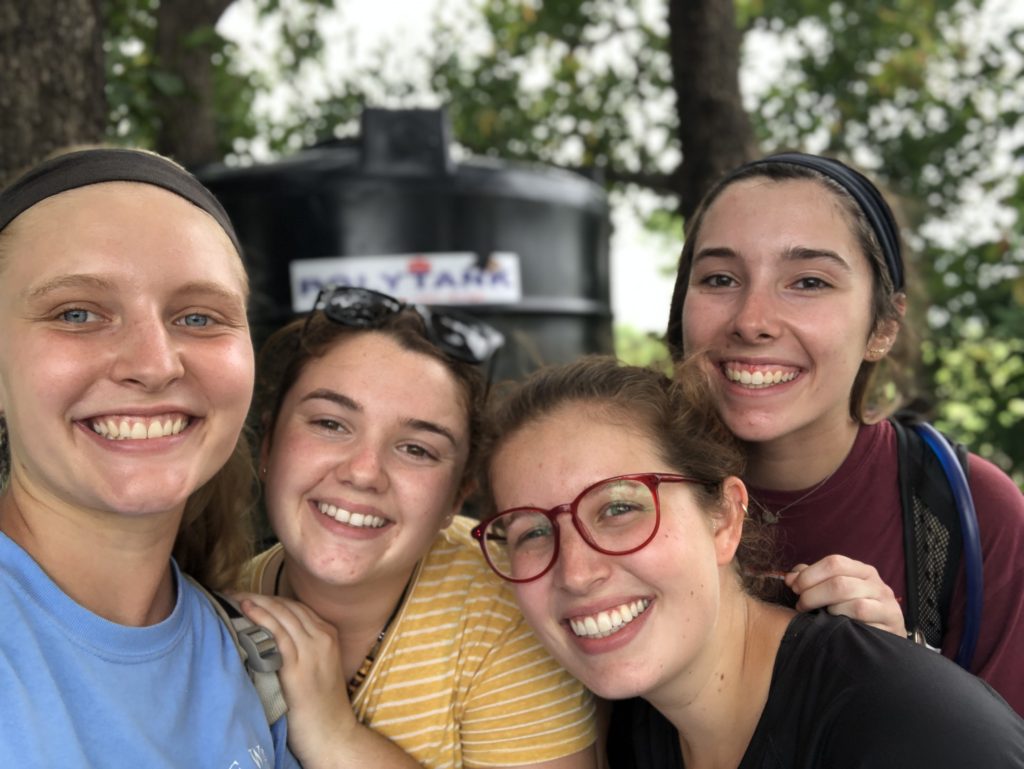 Today was opening day in the village of Kpintalga! We arrived in the village a little before noon, distributing the rest of the safe storage containers (SSC). Though our opening day was previously planned for Tuesday, but we had to push it back until Thursday due to an unexpected death in the community and the metal stand which held the polytank collapsing. This was a devastating event for both us and our entrepreneurs since it caused us to empty out our FULL polytank. But Saha has definitely taught us that anything that can go wrong, will go wrong, so we were prepared.

But Team Nestor persevered and after a couple of incredibly hot and tiring days of distribution, we were ready for opening day! Our women entrepreneurs, Arishetu and Alima, were just as enthusiastic as us and ready to run their business. 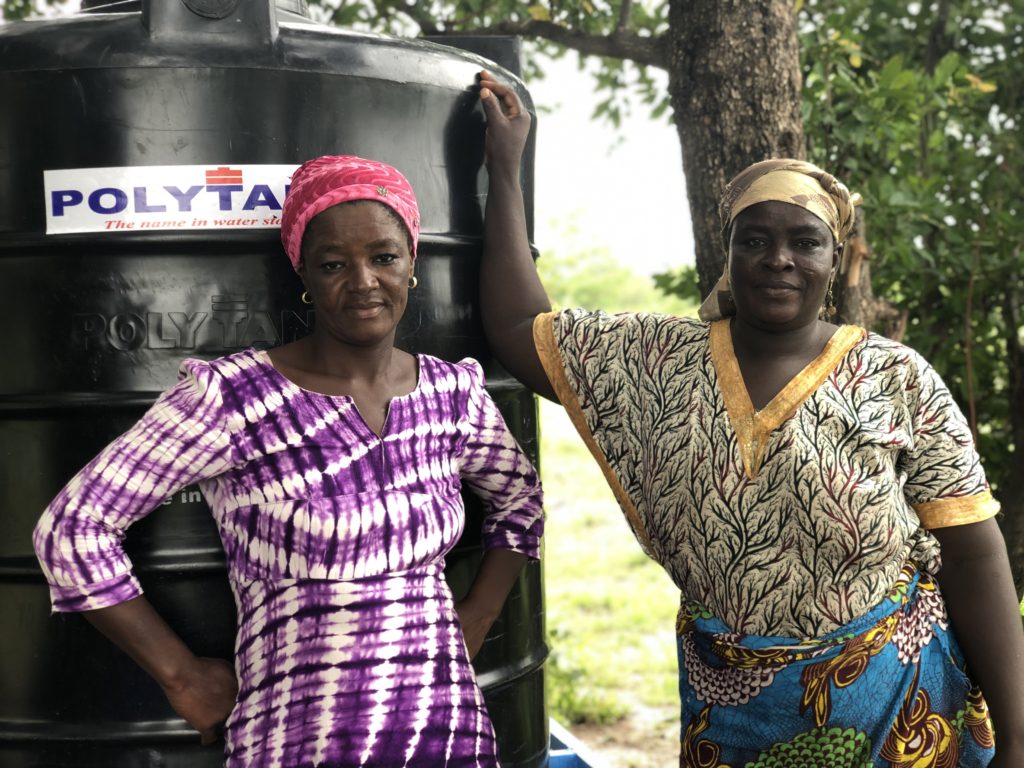 The first safe storage container (SSC) the entrepreneurs filled was the Chiefs’, a great honor ritual we got to experience. Then, as we blasted some American tunes, sang some Girl Scout songs, and played some rough games of soccer, the clean water business of Kpintalga was officially open! A total of 35 out of 40 distributed SSCs made an appearance, and many of the women (especially the kids) were very excited to try the clean water. A huge highlight of the day: no leakages in our SSCs!

All of the women and kids could carry them on their heads without any water dripping down their faces. 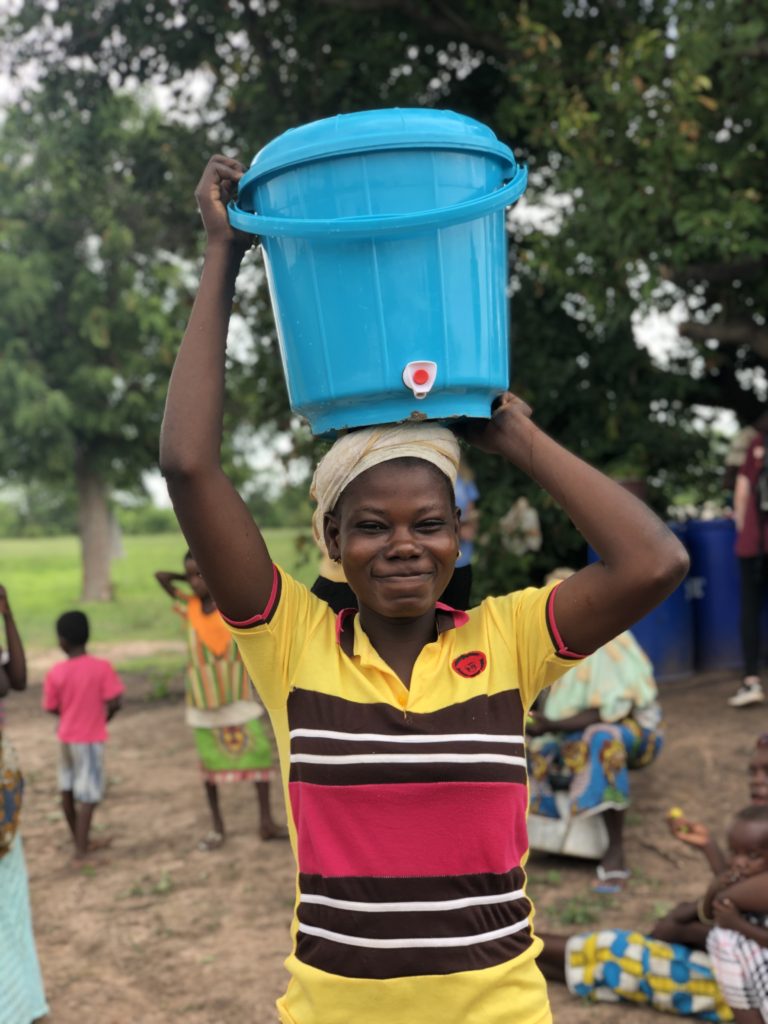 While Nestor helpfully translated for us, Kayla was responsible for all the pictures (giving credit where credit is due, obviously). All the pictures you’ve seen from Team Nestor is all because of Kayla’s hard-work, photography skills, and iPhone X. All the kids were incredibly excited and jumpy whenever the iPhone was pulled out of Kayla’s pocket, ready to snap a memory into permanence. Ali took the administrative role, counting all the SSCs that came to the business and interacted with many of the women. She kept track of the finances and marked off the women who arrived so we could follow up with those who hadn’t, and definitely was the glue that held the group together today. Opening day would have been much more chaotic and far messier if Team Nestor didn’t have Ali in our group. When she wasn’t holding a sleeping Mohmin or tickling Yousseif (we call him Mr. Giggles), Maggie was hard at work, cleaning all of the SSCs. It is really important that SSCs are cleaned often in order to prevent a reemergence of bacteria and dirt. Maggie played a huge role in making sure the new water in Kpintalga was clean and healthy by removing all dirt possible and making sure everyone received healthy and safe drinking water. Sarah, who may be the muddiest of us all, did what she usually does: keep the children entertained and out of the way of the adults. She gave all the kids tons of high fives, taught them new hand games, and shouted Girl Scout songs at the top of her lungs while running around the open field with the kids.

However, the day would’ve gone flawlessly even without our help as Arishetu took complete charge and did an impeccable job serving her community.

Overall, not only did Team Nestor have a great opening day, but also a fantastic week. We are very grateful to have a translator like Nestor, who is a natural leader and incredibly enthusiastic about team spirit. We are also very appreciative that we were assigned such a great community that welcomed us with so much hospitality and excitement. Team Nestor has loved every minute in our community and although our journey is coming to an end as we finish up with monitoring households and clean water school education, it is only the beginning for the community.  Though we are thrilled that the loving village of Kpintalga has clean water, we are sad to see our time in Ghana come to end. This experience has opened up our eyes in ways we can’t imagine and we will never forget the people of Kpintagla and the memories we have made. 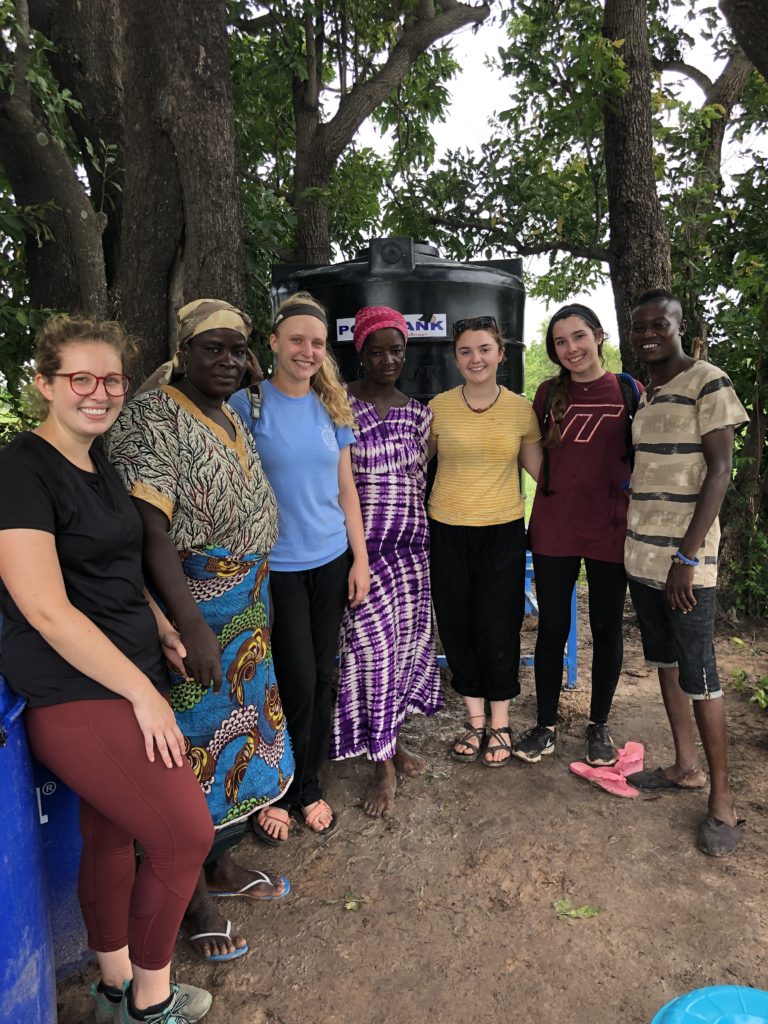