If you can believe it, we’re mid-way through the process of setting up our clean water business here in the outskirts of Tamale!  Over the past two weeks, there have been far too many experiences to recount in full, but one of the most memorable of the bunch has been finally getting to know our women entrepreneurs and training them on how to set up, manage, and eventually take over the clean water business.

Our team works in a tiny village called Lambo, with just 10 village households and 17 Fulani households.  It’s tucked away in a verdant grove, and is very much off the beaten path, leading to a scenic drive there but also lots of difficulties for our villagers when it comes to accessing basic resources.  In particular, their water situation was notably worrisome when we first arrived.  They are currently drinking out of a very shallow dugout nearby town that may dry up shortly if the rains don’t come.  As a result, the water quality is very poor – it is heavily silted, covered with a light layer of scum, and our tests came back showing that it was full of E.coli and other dangerous bacteria.

Fortunately, meeting with the chief and the community went smoothly – everyone was quite receptive to the idea and asked some great questions before welcoming us into their village to begin building the center.  The two women who were nominated to run the center are named Fuseina and Awabu, and both are strong in both body and spirit, incredibly attentive, and very much committed to the well-being of their families. 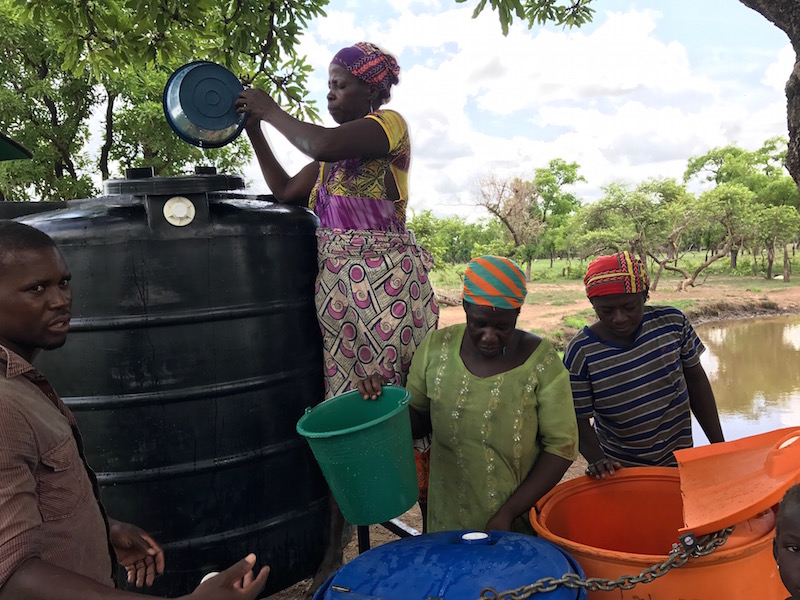 The process of training our women partners turned out to be relatively simple, as they have been dealing with household water their whole lives and intuitively understand the need for providing their families with clean water.  First, they fill our three 200L jerry cans with dugout water using their garrawas, the large buckets they use to fetch water, helping one another hoist them over their heads and pour them expertly into the cans.  Even with only two or three women filling the cans, we were shocked at how rapidly and efficiently they were able to move that much water around so quickly!  A true feat, as anyone who has attempted to lift 50 pounds worth of water over the heads could attest.

Once the jerry cans were full, we showed Fuseina and Awabu how to use alum, our flocculant of choice that helps the sediments in the water clear and settle to the bottom.  Many people in the North have used alum before in order to clear the water they use for laundry.  As a result, the women took to the task instantly, rolling alum into tight balls and barely needing any guidance on how to swirl the golf ball sized chunks in the cans with care.  Finding the right amount of alum to use is a bit of a tricky process – use too little, and the water doesn’t clear, but use too much and the water has a bit of a funky, chemical taste – so we urged our women to err on the side of caution.  As it turned out, the first go around wasn’t quite enough, so we had to add a little bit extra the next day, but no harm done.

Once the water had settled and cleared, and we’d lugged our big, 1400 litre polytalk out to the village and mounted it on the stand, the water was ready for purification!  Using smaller hand buckets, Fuseina and Awabu delicately scooped the clear, sediment-free water from the top of the jerry cans and poured them into the polytank.  We gave them a bag of starter chlorine tablets to use for the time being, and briefly explained to them that they only should add 1 big tablet for every jerry can of water that gets added to the polytank.  The two of them listened intently, nodding and making small comments to one other, before getting right to business.  Sure enough, the water came out clear and sterilized once poured from the polytank and tested, so we should be good to go for our opening day tomorrow – a huge achievement and a great testament to the hard work of our female entrepreneurs.

In all, it has been a delight to get to know the women who will be at the helm of our business, and we only have the highest hopes for them and their commitment towards providing their communities with clean water.  There may be some challenges and road bumps ahead – once the current dugout dries out, we’ll have to relocate the center to a different one nearby – but if the perseverance we’ve seen in our villagers thus far sticks around, they should have no problem getting the center up and running again.  So here’s to a future of clean water for Lambo!