My apologizes for the lack of blog updates recently! If you follow Community Water Solutions on Facebook and Instragram, you probably understand why the blog has been radio-silent: we have been busy, busy, busy, bringing solar power to another community! That’s right, in 3 weeks Sam, Shak, Wahab and I implemented not one, but TWO solar businesses which provide electricity to over 1,000 people. It’s been a crazy-fun learning experience! First let’s pick up where we left off in Sakpalua…

I think the photos in our last blog post really tell it all – opening night in Sakpalua was a big success! Lydia, Damu, Fuseina, and Saramatu were awesome. Two ladies posted-up by the sales door to collect payments and record sales while the other two ladies took batteries out of the chargers and immediately replaced them with a new set to get charging. The business completely sold out of charged batteries within the first 30 minutes! The Burro batteries must be rented out directly from their chargers because as soon as they are removed, they start to loose little bit of their charge. Since,the Genset can only charge 60 batteries at a time, the ladies could only sell those 60 batteries (20 lanterns worth) at once before waiting for another batch to charge up.

We were hopeful that another round of 60 batteries could charge quickly, so we decided to play some videos that we had taken in the community to distract customers while they were waiting. We plugged our projector into the Genset and projected the videos on the side of the solar center. It was a big hit! 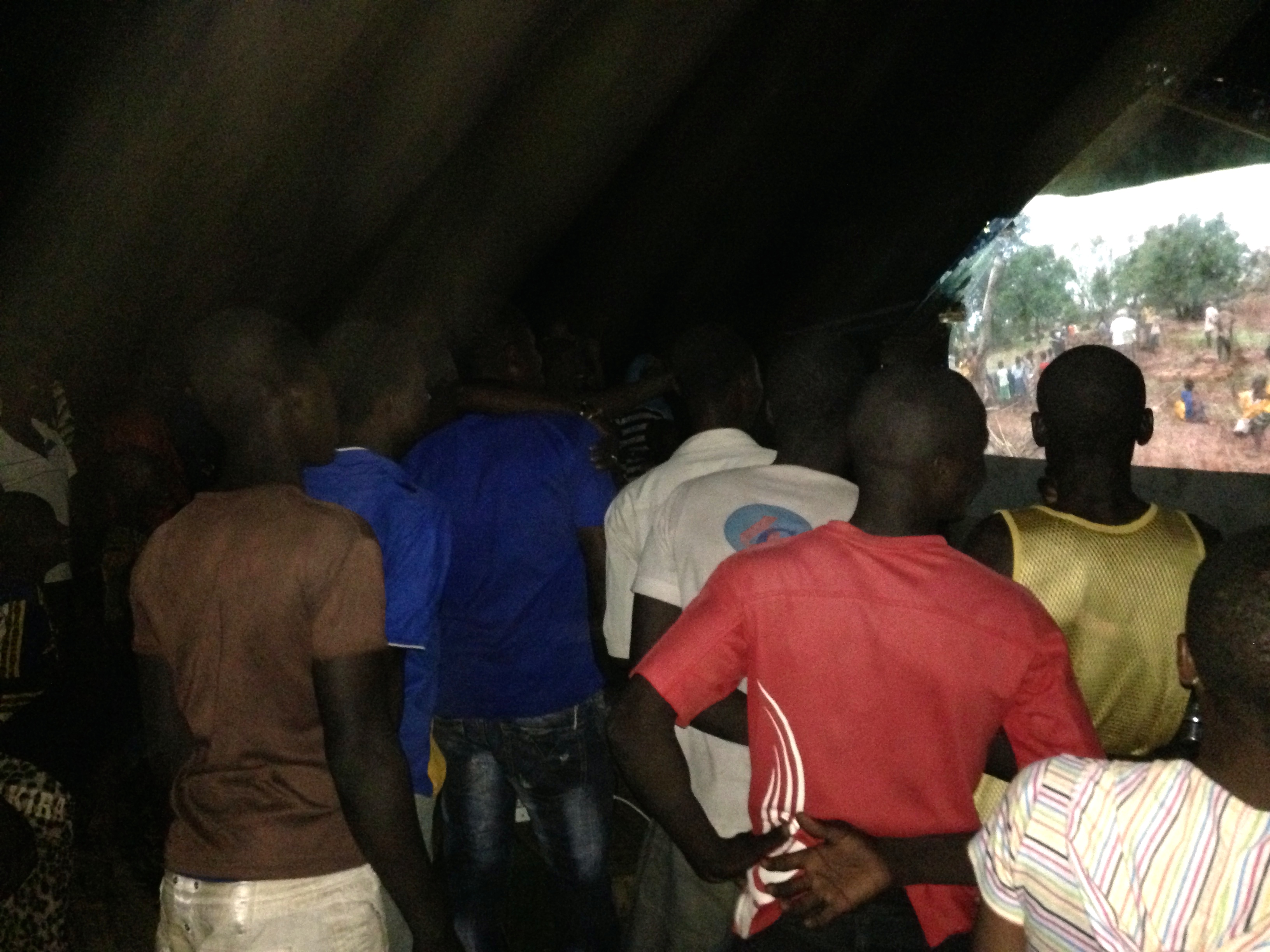 Unfortunately, after 45 minutes of waiting, the next round of batteries still weren’t charged. So, the ladies closed up shop and told the remaining customers to come back in the morning. This often happens on our water business opening days as well.  Since it’s the very first day of sales, it’s the only time that every single family in the community will need water or batteries all at the same time. After opening night, demand starts to spread out as different families use their lanterns more/less (or drink more/less water). The remaining customers in Sakpalua totally understood and came back the next day to rent their batteries!

After opening night, things continued to go well in Sakpalua. By the end of the first week, the ladies had charged over 60 cell phones and rented out over 140 batteries! They also started buying lanterns from us at cost (16 GHC) and selling them for 18 GHC to families both in Sakpalua and in neighboring villages. In that first week, the women had made a profit of over 50 GHC (~ 25 USD). Considering that most families in Sakpalua live on less than 2 USD/day, that’s a pretty great first week of business!

After an exciting night in Sakpalua, we were up bright and early the next day to head to our next solar village, Chani for our chief meeting! Longtime CWS supporters will remember Chani from our Indiegogo video last spring – it’s a rural village about an hour outside of Tamale in the East Gonja District. Our movie-star water entrepreneur, Salamatu, and her partner Munera, have done an amazing job of running their water business, which opened in January 2011. Chani has always been a model CWS partner-community, with consistent water sales throughout the year. We knew they would be a perfect candidate for our next solar pilot![vimeo 61806019 w=500 h=281]

We arrived in Chani to learn that the chief had recently died, and so instead of a small meeting with the elders, the community wanted to have a big community-wide meeting. It was great! Sam, Wahab, and I explained the concept of the solar business and everyone was on board and excited. The village decided right away that they wanted Salamatu and Munera to run the solar business as well since they are the “most hardworking women in the community and know how to count well.” Done and done! So far all 4 of our solar communities have chosen the water women to run the solar businesses too. It’s been very interesting to see that decision made!

Building the solar charging center in Chani went very smoothly. Both men and women from the community were very helpful. Not to toot our own horns, but Sam and I both agree that this is the nicest-looking solar center that CWS has built so far!

Training the women and distributing lanterns also went off without any hiccups. After 3 years of running the water business, Salamatu and Munera are very comfortable working together. They have a very funny dynamic! Sam and I had so much fun with the children in Chani. It was really cool to see the kids that Lucy had photographed 1.5 years ago. We have been using these pictures for all of our PR materials, so those little faces have been ingrained in our memories. It was amazing to see how everyone had grown up so much! 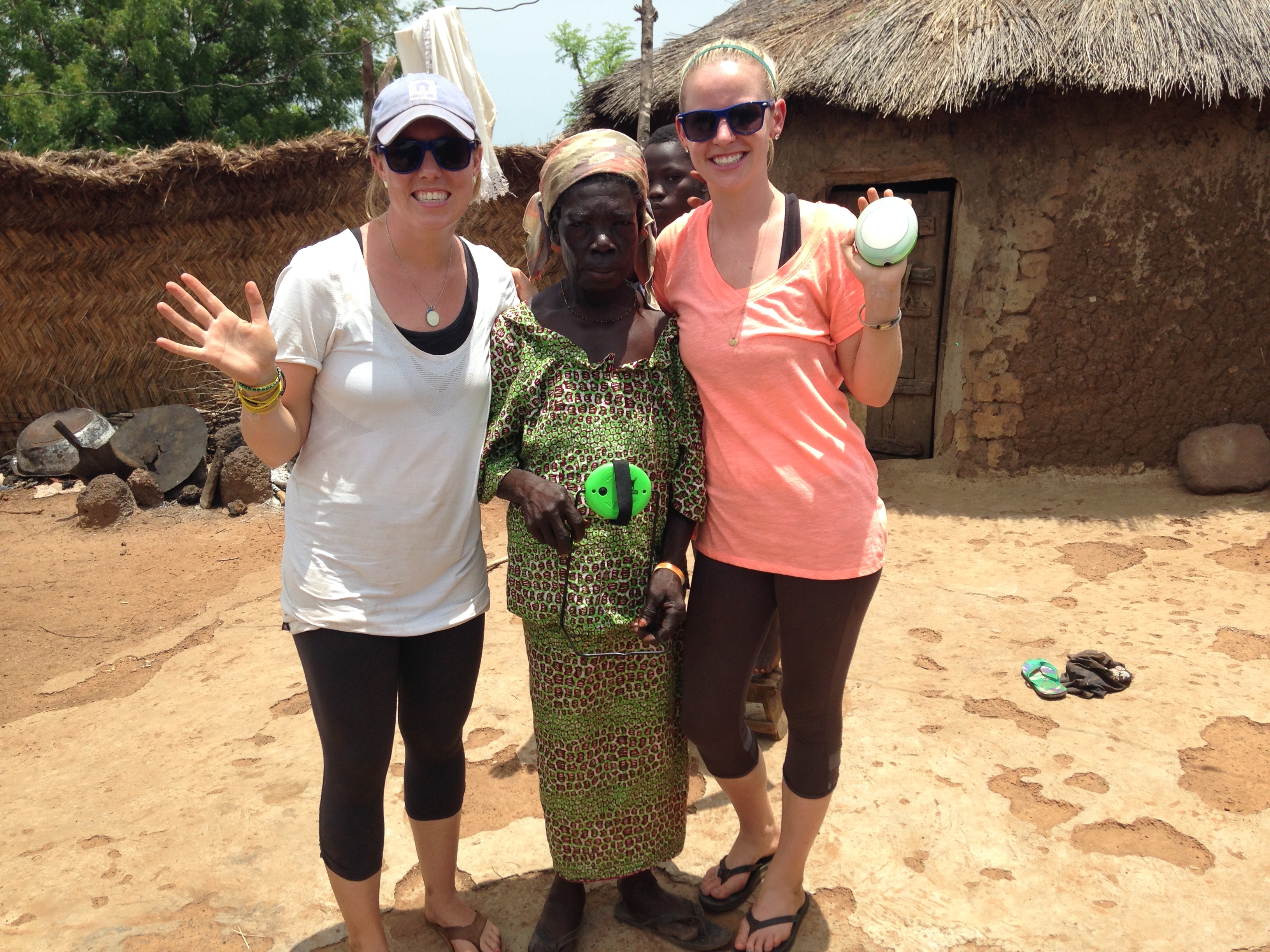 After a very smooth implementation, we were very excited for opening night, which was scheduled for Saturday, April 19th. Unfortunately, when we rolled into the village that night, we hit our first major implementation roadblock: nothing was working! When we left Chani 4 hours earlier, the Genset was on, the sun was shining down on the solar panels, and all of the battery chargers were plugged in. When we returned, the Genset was off, the chargers were off, and the batteries were not charged. Shak, the electrician by nature and the most experienced with our solar charging stations, immediately got to work taking apart the system and investigating the problem. While he was doing that, I called up our partners at Burro, who we bought the Genset from. After about 30 minutes, we all realized that the problem was something major that would not be able to be fixed that night.

The problem with the Genset was very disappointing for a couple reasons. First and foremost, the entire village was out waiting for rent their batteries and charge their phones. Chani had been wanting access to electricity for so long and it was so hard to tell them that they would have to wait, even though it would only be a few days. People in these communities are VERY used to foreign NGOs making big promises and never following through. Even though we have worked with Chani for over 3 years, and they trust our partnership, it was still heartbreaking to pull away that night, with all of our equipment in-hand when we had promised electricity that night. The other reason this was particularly disappointing was that it was a holiday weekend, which meant that there was no way the Genet could get fixed before Sam and I had to leave for the States. In the grand scheme of things, opening night isn’t about us at all – it’s about Salamatu, Munera and the families in Chani. But, after 3 weeks of 4:45 am wakeup calls, without one day off, we were bummed to miss opening night.

The reality is, things like this happen ALL of the time when you are working in development. The fact that our other 3 previous pilot implementations had all gone smoothly is the exception, not the rule. This problem in Chani gave our team some great experience in learning how to to deal with Genset issues. If this happens during a Fellowship Program, we will be prepared! Burro, was also great to work with and proved to be very committed to getting us a working Genset. They were available to our team any time of day, despite their holiday weekend and one of their re-sellers in Tamale ended up being the guy to fix the problem. The issue ended up being a faulty inverter, which Burro replaced for us. There was nothing that our team, or the ladies in Chani had done wrong in setting up the system – it was simply a bad part.

Shak and Wahab did a great job working with Burro and communicating with Chani. The following Wednesday, opening night part 2 went off without a hitch! Every household in Chani rented batteries for their lanterns and some brought their cell phones as well. Salamatu and Munera were really excited and no one seemed upset that opening night was delayed. Brianan’s family was in town to visit her and they all got to come out for the opening – it was great to have such a big crowd there to celebrate! A BIG THANKS, again, to Next Step Living for funding the start-up cost of the solar businesses in Kurugu Vohoyili, Sakpalua, and Chani!

In 3 short weeks, Sam and I will be returning to Ghana with 46 water Fellows and our first-ever team of solar Fellows. We can’t wait to get back to Tamale and run our biggest-ever Summer Fellowship!