As successful and exciting as Opening Night proved to be, it was just the beginning for Wambong.

One of the things that differentiates Community Water Solutions and InnovaSun from other NGOs is their commitment to the communities they work with. Most organizations come and go, but consistent and regular monitoring is a cornerstone of our program, and for good reason. A lot can happen after you implement a new program; faulty equipment, low adoption, even just general confusion.

So as you can imagine Ben and I were anxious to get back to Wambong and see for ourselves how things were going. While everything until that point had gone smoothly we were bound to hit a roadblock at some point, and as we pulled up to Wambong, it looked as if that day had come. Nothing was charging! That is to say, lots of stuff was plugged in but the system was effectively turned off….uh oh. We checked all the connections, restarted some of the equipment and still the system would just turn on for about a minute and then turn off again – something Chang Chang and Salima noted had been going on since the opening. After testing all of our bases it was clear there was little to no-juice in the batteries. We concluded that we must have used all of the electricity during the Opening Night celebration. Operating several light bulbs, charging cell phones and setting up a surround sound system has its consequences.

We realized we were going to need to be a little more careful in rationing our electricity – limiting the number of lanterns and cell phones that can charge each day. Although the situation isn’t ideal, it’s the best we can do considering how big the community is. The Solar panels can only generate so much electricity each day, and in all our planning we didn’t anticipate needing to share that electricity between 1000 people. We told the women to close the charging center for the day to allow the batteries to recharge and that they could open the following day using our rationing guidelines (13 lanterns and 20 cell phones per day). 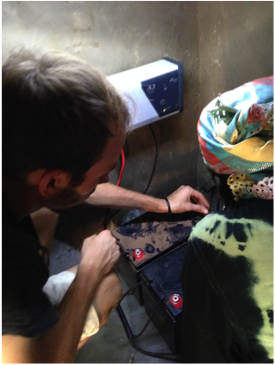 You can imagine our surprise the next day when we pulled up to the solar center and it was closed again! As we began to investigate we saw that there were plenty of things plugged in, and even more electronics waiting to be charged, but once again the system was turning on for a few seconds and then turning off. Using some engineering logic – it became clear that electricity was not getting to the batteries so we began working backwards piece by piece to determine where the flow of electricity was getting stopped. Finally we discovered that electricity wasn’t getting through the Charge Controller – the piece that protects batteries from overcharging and potentially exploding. We began to fiddle with the wires to determine if it was a problem with the connection or the piece itself and thankfully we realized that the wires had come loose. Every moment is a learning experience, and we used the opportunity to coach the women in charge on how to troubleshoot. The power of monitoring! 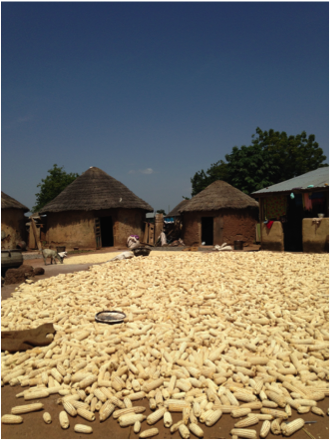 As soon as the system was hooked up properly, everything turned on and began charging away. Success! This was the fix we were looking for all along and we were hopeful that there wouldn’t be any more problems. With that we let the women get to work and began visiting households in the community. Over the next few days we were able to visit approximately 25 households to see how they were adjusting to the new solar center. Monitoring the households became even more valuable because we were able to dispel rumors that the center wasn’t working, letting families know that we had fixed all of the problems. We got to see where people were keeping their lanterns (most families had already installed a nail to hang it from) and ask about how many cell phones were in the home. People’s excitement around the center was obvious, and while there were still some kinks around the lanterns (some were defective and didn’t hold their charge for very long) most people were just so happy to have lights, and a place to charge their cell phones.

So while the opening of the solar center was really just the beginning, our last few days

there were only the start of the middle. We continued to check on the center which was generating electricity no problem. We talked to people in the community about phones and lanterns, and left knowing that things were in good hands. Monitoring is always important because it gave us the opportunity to both troubleshoot and learn from our own choices about maybe what lanterns to use in the future or to see how families were using the electricity.

We created some evaluation sheets so that Shak and Brianan can continue to monitor once we are gone. With monitoring underway it was time to say goodbye, but I think that is best served in my final post. Check back to hear my concluding thoughts on my time in Ghana!