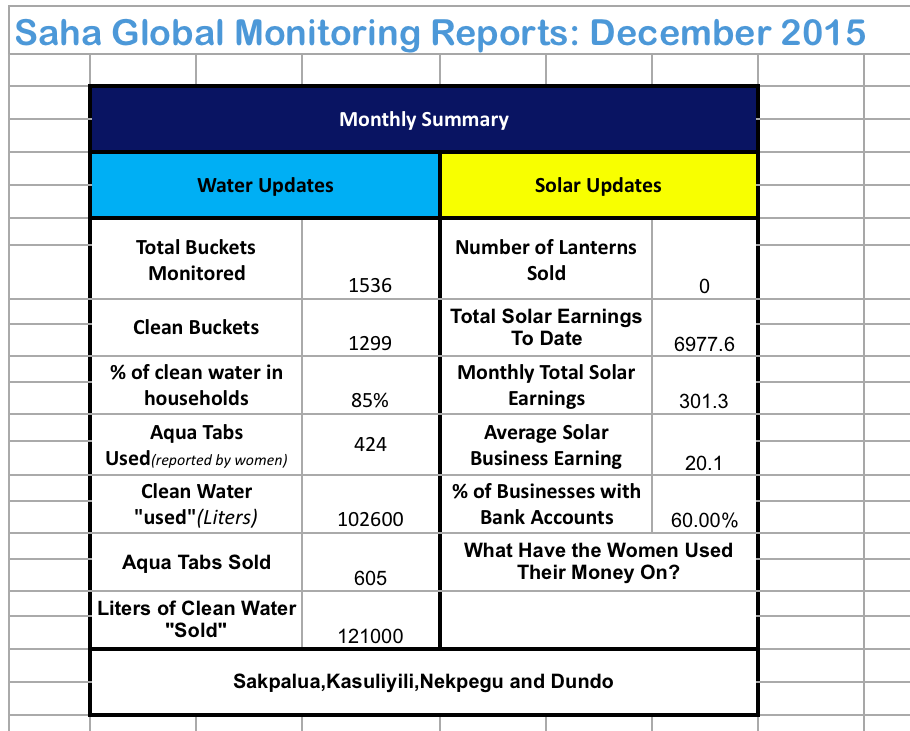 December was a great month for both our water and solar businesses. Despite some challenges (see below), our usage rate for the water business was higher than our usual average, with 85% of people drinking clean water! Our team really focused on education this month as the rains have totally stopped and people have no other option, other than the water treatment centers, for safe drinking water. Their hard work paid off!

The solar businesses were also thriving with high sales and exciting purchases made by many of our entrepreneurs. Read on for photos and more info!

This is the first monitoring post written by Saha Manager Eric Angkosaala and Senior Manager Wahab Lawal. I’ll let them take it from here:

The Kpanshegu water business made a lot of they had made a lot of sales this month. The ladies made a total of 70cedis and are planning to buy crops to store and later sell.The following villages had high sales and had 6/6 household visits  at some point during the month (meaning every house visited had clean water in their safe storage container at the time of the visit): komlanyili, yepela, tunga, kideng, indigenous kabache, nekpegu, tohinayili, kagbal, warvi, sagbragu, namdu I, yakura, balomposo, jangbarigiyili, and changyili.The overall percent usage rate for the month was 83%, which is above our typical average of 75% Go water villages!

We also had some successes with our solar businesses this month. The Voghyili solar center had high sales because people were coming from Djelo to charge their phones and batteries. This is a success for Voghyili but a challenge for Djelo (see below). The ladies in Voghyili also bought phone chargers for the center. The entrepreneurs in sakpalua  bought some crops so they sell later when prices increase.

The water businesses that had challenges during that month were jarigu, kpalbusi, kudula, jagberin, jarayili. All had very low or sometimes no sales. To address this issues, our team emphasized that the entreprenuers shoulld try to make announcements when their business is open and to go round households anytime they treat water. Nyamalga, kasulyili and jabayili have closed centres at the moment, but we are working with the entrepreneurs to get them back up and running. In nyamalga, the stream that they use for their source of water in the rainy season has run dry and they need to move the center back to the dugout to resume business. Moving seems to be taking a long time, but we are hopeful that they ladies will get it set up by the dugout soon. The reason for the delay is that the Chief of nyamalga recently passed away dead so the village is busy arranging for the funeral. As we mentioned in previous posts, kasulyili now has a project that pumps dugout water to the village. Although this water is not treated, the community thinks that the water is safe because it is coming from a pipe. Wahab held a village meeting with chief and elders and women but there is still no change in behavior yet. We plan to do continued education in kasulyili over the next couple of months to help people realize that the water is not treated and unsafe for drinking. As we mentioned last month, J two blue drums stolen were stolen from Jabayili, which has stalled sales. The community is working on buying new blue drums. Additionally, yapie yepela now has running taps and so the women have not been treating water. We don;t really view this as a challenge because all of the water test came out clean from this tap! Go Yapie. We are keeping the water center in this village for now until the community can be sure there there will be consistent water access at the tap.

Villages that had solar challenges were yepalsi and djelo. Both had broken inverters and our technician from Burro had a major delay in helping the women fix them. In Sakpalua, chani and nekpegu people have noticed that their lamp batteries don’t last long after charge. This is something that we anticipated since the batteries only last 500 charges before needing to be replaced. The entreprenuers at these villages are working on buying new batteries to replace the older ones. Addtionally, voghyili had four broken battery chargers. These were still under warranty, so Burro replaced them.